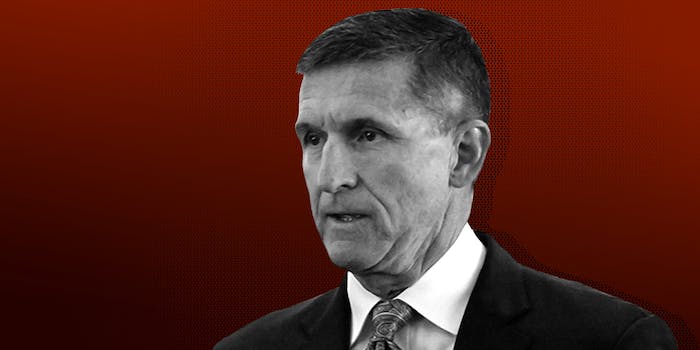 Another round of indictments could be coming soon.

According to the report, Mueller already has the evidence necessary to indict Flynn, who was fired mere weeks after Trump’s inauguration amid revelations that he’d discussed sanctions with Russian ambassador Sergey Kislyak prior to the end of the Obama administration. He was also revealed to have been working as a paid agent of a foreign government during the presidential campaign, taking money from Turkey.

He’s not the only Flynn referenced in the report, however. His son, Michael Flynn Jr. is also reportedly facing an indictment, although in his case, it’s less clear what the nature of the alleged crime would be. Flynn Jr. worked in close proximity to his father, serving as an adviser and effectively a chief of staff, in addition to his famously combative far-right persona on social media. Notably, Flynn Jr. was one of the proponents of the right-wing Pizzagate online conspiracy theory, which ultimately provoked a man to fire a gun inside a Washington D.C. pizzeria last December.

In the case of the elder Flynn, he was reportedly paid more than $500,000 to represent Turkish interests, but he did not disclose this information by filing as a foreign lobbyist.

Of particular interest to Mueller and his investigators, according to the report, is Flynn’s alleged interest in extraditing Turkish cleric Fethullah Gulen back to his native country. Gulen currently resides in Pennsylvania, and Turkish President Tayyip Recep Erdogan blames him and his religious movement―known as the Gulen movement―for an alleged coup attempt against him in 2016. Former CIA Director Jim Woolsey has alleged that Flynn and Turkish officials discussed effectively kidnapping Gulen and shipping him back to Turkey. A spokesperson for Flynn denied Woolsey’s story, saying the former general never discussed any “nonjudicial physical removal” or other illegal activities.

It remains unclear when the next round of indictments from Mueller might come. NBC News has reported that a trio of other Trump campaign figures are under Mueller’s scrutiny, and two of them are very close to the president: Carter Page, Trump’s son-in-law Jared Kushner, and Trump’s eldest biological son, Donald Trump Jr.