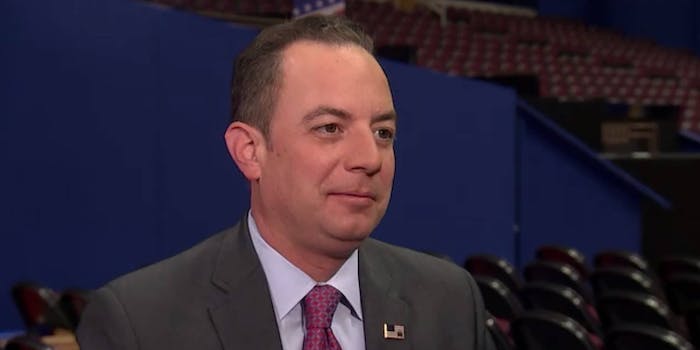 Priebus defended the GOP platform's language on parenting in no uncertain terms.

With presumptive Republican nominee Donald Trump’s selection of Indiana governor Mike Pence to be his running mate, the GOP’s presidential ticket has been infused with a far more traditional energy.

Pence is essentially a standard-issue Republican governor on economics, taxes, and trade, and a hard-charging culture warrior on faith and social issues. That blend is nothing new to likely GOP voters. The latter part? specifically, Pence’s career-long, strident opposition to LGBT rights?risks reinforcing some of the most divisive impressions of the Republican Party.

If you needed proof that the Republican Party still doesn’t know how to navigate issues central to the LGBT community, you need look no further than a very awkward moment during Republican National Committee chairman Reince Priebus’ interview with Chuck Todd on NBC’s Meet the Press on Sunday morning.

Priebus is in the rather excruciating position of being his party’s chairman while it implodes around him. While countless conservatives have been alienated and disgusted by Trump’s ascension to the top of the GOP, Priebus has instead played the part of the win-at-all-costs loyalist, urging unity above all else, and dismissing the “Never Trump” movement as “silliness.”

But on Sunday, he ran headfirst into a different kind of sticky situation. Todd asked Priebus how he felt about recent drafts of the official GOP platform, which (as Todd pointed out) has included some planks that seem to contradict the conclusions of the GOP’s 2012 campaign autopsy after the Romney/Ryan ticket was defeated. Specifically, Todd highlighted a draft (the final platform will be passed on Monday) that had some conspicuous language about family and child-raising:

“There’s one in a draft that says ‘Children raised in a traditional two-parent household tend to be physically and emotionally healthier, less likely to use drugs and alcohol, engage in crime, or become pregnant outside of marriage. The data and the facts lead to an inescapable conclusion that every child deserves a married mom and dad.’ It’s implying that somehow children of same-sex couples are more likely to be addicts, or to engage in crime? Do you mean to have it imply that?”

Priebus looked more than a little thrown by the question and stammered as he began to answer. But he did answer it, denying that the plank implied that children of same-sex couples are at a higher risk of becoming addicts or criminals, but also maintaining that yes, heterosexual parents are the “best scenario.”

“No, what we mean is that the best scenario for kids is a loving mom and dad. However, it doesn’t mean at all that single parents, that same-sex parents, that any parent in America can’t love a child, and can’t raise a child, and that child can’t be successful and loved. So, it doesn’t mean that. It just means what the facts say. Look, like I said before, love, respect, dignity. But, traditional values, and that’s what our party is about.”

For the record, the facts don’t support what Priebus is saying. To the extent that there’s been research into children who’re raised by same-sex parents rather than opposite-sex parents, the findings have been pretty straightforward.

Back in April, a major study in the Journal of Developmental and Behavioral Pediatrics determined that there was no difference between the two, and that children raised by same-sex parents are just as healthy and successful.

In a moment, the exchange between Priebus and Todd encapsulated so many of the problems the GOP is having in speaking on LGBT-related issues: continuing to support inherently discriminatory notions and policies, while insisting that they’re still treating people with “love, respect, and dignity.”

And it’s a challenge that they’re going to face going forward. Rest assured, with the man who signed Indiana’s anti-LGBT religious freedom bill into law now on their presidential ticket, the questions certainly aren’t going to stop for Priebus and any other Republican supporting a Trump/Pence ticket.