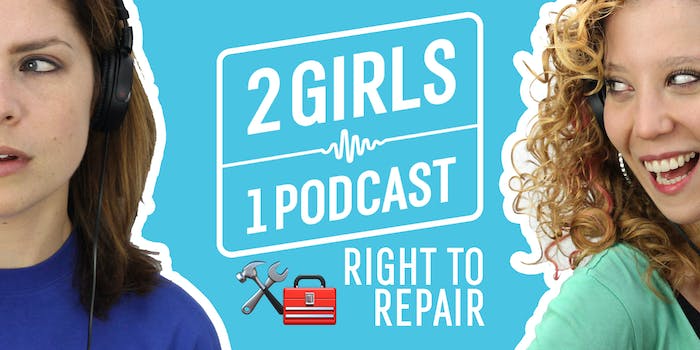 Fighting for the right to repair.

Back in the day, if your computer or an appliance broke down, you could pop open the case, unscrew the faulty part, and order a replacement from the manufacturer for a few dollars.

But increasingly, companies are more secretive about their proprietary tech. They keep their parts and schematics hidden, and when your iPhone or tractor breaks down, you’re forced to pay exorbitant repair costs—or worse, throw it away and buy the latest model.

But for years, advocates of the Right to Repair movement have been sharing knowledge about the devices we use every day and creating a wealth of online content to help people fix their own stuff for free or cheap.

This week on 2 GIRLS 1 PODCAST, Alli and Jen talk with Steve Porter, a lifelong “fixer” who has built a professional repair business and a thriving YouTube channel where he teaches his 700,000 subscribers how to repair video game consoles, phones, and retro tech.

Porter shares the inspiration for TronicsFix, how he makes money buying broken tech, and his involvement in the Right to Repair movement, which is pushing to change repair laws to protect consumers.