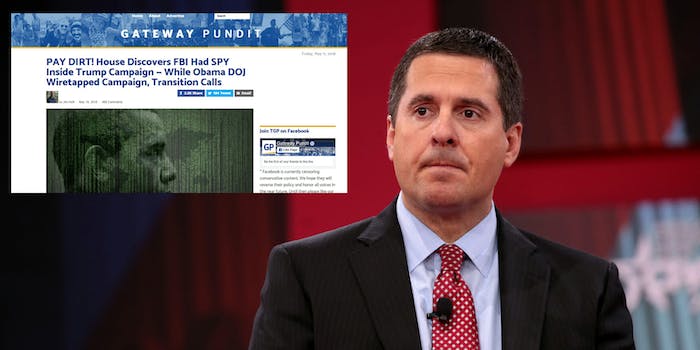 Earlier this week the Washington Post reported that the FBI and intelligence officials told the White House that information that Rep. Devin Nunes (R-Calif.) was seeking could endanger a “top secret intelligence source” who had relayed information to Special Counsel Robert Mueller amid his investigation into Russian interference in the 2016 election.

Nunes has been after undisclosed information ever since April, when he sent the Justice Department a classified letter. Nunes said he is not interested in the source’s identity, but that he is continuing to investigate abuses of the Foreign Intelligence Surveillance Act.

The Justice Department has withheld the document Nunes wants, because it could reveal the classified source.

While the report mentioned that the White House, and President Donald Trump, agreed with the intelligence communities request to block the documents from being handed over to Nunes, it has not stopped the right from believing this was a smoking gun for evidence that the “deep state” was working hard and fast to undermine the president.

Nunes, who heads the House Intelligence Committee, according to the Post, was so enraged with the decision not to provide him with information that he said he may hold Attorney General Jeff Sessions in contempt of court for not handing over the document.

On Thursday, after meeting with the Justice Department, Nunes appeared to cool off from his threat.

All of this has led some of the most conservative, and pro-Trump, websites online to suspect that the “Deep State”—a conspiracy theory that posits that a “shadow government” is pulling the levers in an effort to undermine the president—was at work.

This wouldn’t be the first time Nunes has been at the center of a online conservative frenzy. Earlier this year his team put together a memo which accused the FBI of FISA abuses which was ultimately met with questions after its release. The memo became a rallying cry for conservatives online, centering around #ReleaseTheMemo.

The Gateway Pundit, a far-right conservative blog, used the story to claim that former President Barack Obama and his “deep state minions” had a “spy in the Trump campaign.”

The website used an opinion piece published in the Wall Street Journal as the crux of their argument. The op-ed argued that intelligence officials withheld documents from the House Intelligence Committee—which just recently ended its own investigation into Russian interference in the 2016 election—and suggested that the FBI had someone “secretly” on their payroll “who used his or her non-FBI credentials to interact in some capacity with the Trump campaign.”

That’s led to furious speculation online about who the person might be and how they may have helped the FBI get information on the Trump campaign.

But it obscures the fact that even the president believes it’s someone who shouldn’t be outed.