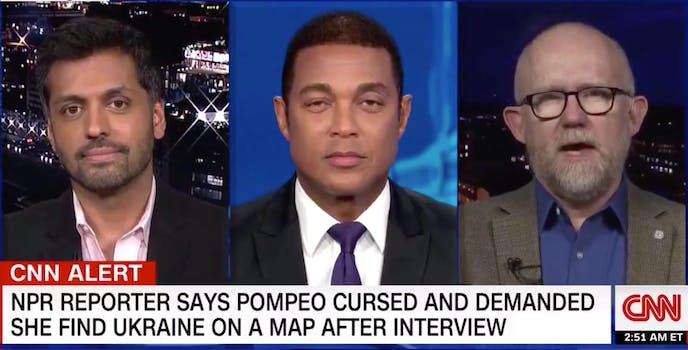 Conservatives are frothing over a Ukraine joke told on CNN

Over the weekend, NPR reporter Mary-Louise Kelly detailed an incident with Secretary of State Mike Pompeo, where he demanded she point out Ukraine on an unlabeled map.

The point, Pompeo was making, was that most Americans couldn’t find Ukraine on a map.

On a CNN segment over the weekend, host Don Lemon; anti-Trump Republican/resistance bookseller Rick Wilson; and New York Times columnist Wajahat Ali discussed the story. Wilson joked that Trump couldn’t find Ukraine on a map if you spotted him the letter “U” and a picture of a crane.

The trio riffed on it, pretending to be a hypothetical Trump voter who didn’t care that people could read maps or knew basic geography.

America, this is what CNN thinks of you…
pic.twitter.com/puuVjRLlw1

Which is, literally, what Pompeo was saying. That the average American couldn’t point to Ukraine on a map and didn’t care about it.

When he did it, it didn’t spark outrage, just a rallying cry from Republicans against the media.

When this group did the exact same thing, it sparked a thousand tweets of the “elites” being dismissive of the intelligence of the average American.

Not only did Trump himself share the clip, his daughter, who is the heiress of a million-dollar fortune, went in on the nation’s “elites.”

You consistently make fun of half the country and then complain that it is divided.

The arrogance, mocking accents and smug ridicule of this nation’s ‘Real Elites’ is disgusting. https://t.co/p3RQzymx4s

The arrogance, the dismissiveness, the smug cackling, the accents.

If Donald Trump wins re-election this year, I’ll remember this brief CNN segment late one Saturday night in January as the perfect encapsulation for why it happened. pic.twitter.com/8kQ6zN9AZV

Imagine accepting the title of “elite” and thinking “U-Crane” is a clever joke https://t.co/9tNnhBjwaa

As of press time, the indignation was picking up steam on Twitter.