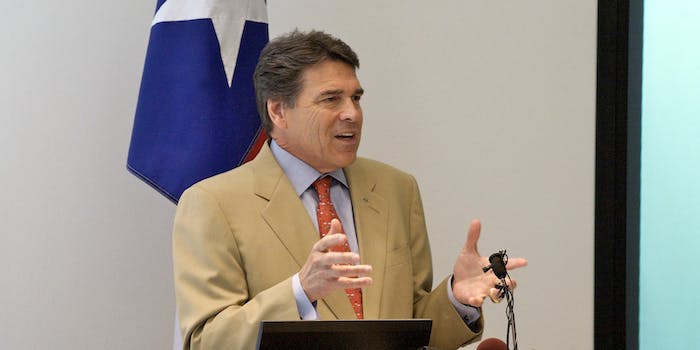 It's going to be different this time. Fingers crossed.

Rick Perry announced his candidacy for president on Thursday, and he’d like you to watch him hit the campaign trail using Snapchat.

Snapchat, as you know, is the premiere social media app for politics because it deletes everything candidates say after the message has been absorbed by their base.

The former Texas governor ran for president in the 2012 race, too, but his poor debate skills and cringe-worthy campaign ads eventually forced him out of the race. All of which likely means we’ll be seeing some fantastic snaps from the bespectacled politician.

There was that one time he thought Supreme Court Justice Sonia Sotomayor’s name was “Montomayor.” And who could forget the sight of Perry walking up the side of a green hill wearing that jacket? “Gays can serve openly in the military,” he told us, “but our kids can’t openly celebrate Christmas.” It’s sad because it’s true.

But it’s a new dawn, it’s a new day, and this time Perry will have something more to say than just “Those of you that will be 21 by November the 12th, I ask for your support and your vote.” (The legal voting age has been 18 since 1971 and Nov. 12 would have been six days after the election.)

Remember, Perry has had plenty of time to learn what it takes to be president, like what the difference between Iraq and Iran is. After all, it’s important for the commander in chief of the United States Armed Forces to have at least a general idea of where his troops have been deployed over the past 12 years or so.

At this time, we know very little about what Perry’s plans are should he ascend to the highest office in the land. Naturally, the first order of business is to kill a peace plan with a country we’re worried may one day obtain a nuclear weapon. But after that, like the evolutionary change in lifeforms over successive generations, it’s all up in the air.

Speaking of up in the air, whatever happened with Rick Perry’s felony indictment? Yep, still happening.