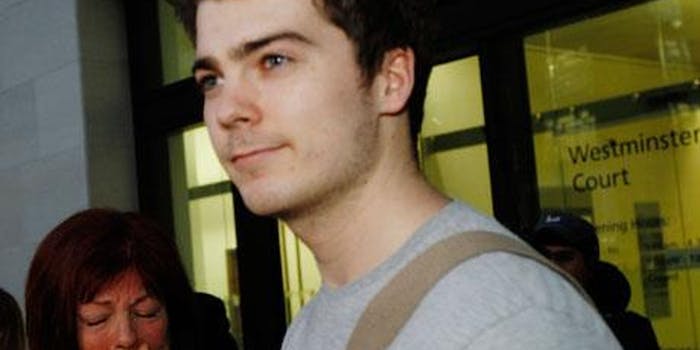 The  24-year-old TV Shack creator has won his year-long battle to avoid being extradited to the U.S.

Richard O’Dwyer, the English college student who ran the the allegedly copyright-violating website TV Shack, will avoid being extradited to the U.S. for trial.

It’s unexpected, and extremely positive, news for O’Dwyer, who by all appearances has been sentenced to extradition since January. O’Dwyer being shipped to the U.S. seemed inevitable in July, when British Home Secretary Theresa May signed an extradition order despite overwhelming popular opposition.

No one was more thrilled with the news than O’Dwyer’s mother, Julia, who has tirelessly fought for her son since her home was raided by U.S. Immigrations and Customs Enforcement (ICE), and he was arrested, in June 2010. Plenty would argue that O’Dwyer never did anything illegal—TV Shack reportedly linked to streaming video of copyrighted movies and TV shows, but never actually hosted them. But his mother’s biggest hope, as she told the Daily Dot in March, has always been to have him stand trial in his own country.

“If we were fighting the crime in the U.K. it would be very much less stressful,” she said at the time. “We know that even if found guilty [here in England,] he would just get a small fine.”

O’Dwyer, now 24, has agreed to a plea bargain deal, and he’ll have to fly to the U.S. to sign an agreement and pledge not to infringe on copyright again. Most other details, like how much he’ll have to pay, are unclear, though the BBC, which reported the news Wednesday, called it a “small sum of compensation.”

ICE has claimed O’Dwyer made $230,000 from TV Shack, though that number’s unverified.

Also unclear is why the U.S. would offer a plea bargain, especially when extradition seemed all but assured. It’s possible they faced legal concerns: The 7th Circuit Court of Appeals ruled in August that embedding streaming videos of copyrighted material isn’t actually infringement.

Regardless of the reasoning behind the offer, Julia’s Twitter account, which often ebbs and flows with activity depending on if she’s at work or if she’s trying to raise awareness of her son’s plight, has been filled with joy since she heard the news. Page after page of tweets echo the same sentiment to well wishers: “Thank you its a huge relief!”