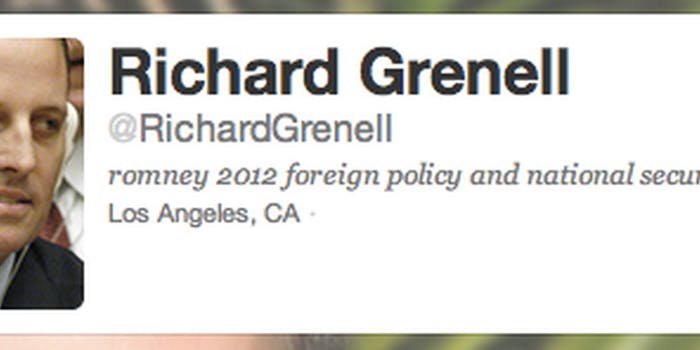 The spotty Twitter past of Romney’s ousted, openly gay adviser

Richard Grenell was let go from Mitt Romney's campaign after just two weeks. Some suggested his controversial Twitter past played a part in the decision.

Richard Grenell said he lost his job as spokesperson for Mitt Romney’s presidential campaign for being openly gay, but some are starting to ponder if it was his spotty past on Twitter.

A former foreign policy adviser to Pres. George W. Bush, Grenell was recently hired by Romney’s campaign to advise the former Massachusetts governor on world issues. But Grenell didn’t make it more than two weeks before resigning. In a statement, he said that he was being benched because some supporters of Romney didn’t want a gay man speaking for the Republican candidate:

“My ability to speak clearly and forcefully on the issues has been greatly diminished by the hyper-partisan discussion of personal issues that sometimes comes from a presidential campaign. I want to thank Governor Romney for his belief in me and my abilities and his clear message to me that being openly gay was a non-issue for him and his team.”

But some believe the decision had more to with Grenell’s spotty Twitter past. Although most, if not all, of Grenell’s most controversial tweets have since been removed by him, news organizations from Slate to Politico were quick to archive the posts soon after Romney hired him. He apparently attacked everyone from Rachel Maddow to Rick Santorum on Twitter. Some of the best included rants about the men Romney was competing against.

For example, on March 6, he tweeted, “Calista stands there like she is wife #1,” a reference to Newt Gingrich’s third wife.

On Feb. 22, he said, “I’m Rick Santorum and gay people should be deported.”

He was also critical of the media and Democratic Party, noting on March 4: “Breaking News: Putin wins Russian vote and a bear just took a s¥!# in the woods.” Later that same day, he added, “MeetThePress is a commercial for the Democratic Party & its radical feminist agenda. nobody is trying to outlaw contraception @davidgregory.”

Some were eager to find the silver lining to the decision: Perhaps Grendell’s departure would mean the return of his famous tweeting.

As Sam Stein wrote, “Wonder if Richard Grenell will re-tweet the 800 or so that he erased.”