Trevor Greene suffered a major brain injury in 2006, but he just took a major step in his rehabilitation.

A robotic exoskeleton is restoring mobility to a military veteran who suffered a brutal brain injury in the line of duty.

Trevor Greene was a civil military cooperation officer bringing infrastructure assistance to villages in the Kandahar province of Afghanistan in 2006. While the Canadian explained to some locals his country’s desire to bring aid to the region, he reportedly removed his helmet as a sign of respect and was struck in the head with an axe swung by a 16-year-old boy.

The head trauma was extensive; that Greene is even alive today is something of a medical marvel. He survived his injuries and became the subject of a biographical documentary called Peace Warrior. He regained major functionality due to a feature of the brain called neuroplasticity—an umbrella term used to describe how the brain can rewire itself in light of damage or impact, rebuilding old processes in new ways.

While Greene’s neurology has healed and adapted such that he can speak and function, it has yet to control his legs. He can’t walk on his own—but he can with help from an assistive robotic device called a ReWalk.

The ReWalk is a robotic exoskeleton that can hold a person upright and naturally move them around while the user helps maintain balance with two crutches. The Massachusetts-based manufacturer’s entire goal is to build devices “allowing wheelchair-bound individuals to stand and walk once again.”

As most ReWalk users are paraplegics with no sensation below the waist, they reportedly feel a floating sensation as the device hoists them to their feet. Here’s what a ReWalk user looks like when wearing the device:

Greene contacted researchers at Canada’s Simon Fraser University (SFU), who collaborated with ReWalk to build a special rig to Greene’s specifications. Greene’s physiology presented some additional challenges, and an off-the-shelf solution would not do. Carolyn J. Sparrey, assistant professor of mechatronic systems engineering at SFU, elaborated on the technical difficulties her team had to overcome.

“In addition to his injury being outside the approved conditions, [Greene] is also quite tall and strong—6′ 4″ and over 200 pounds—which are at the operation limits of most systems,” Sparrey told the Daily Dot via email. “To top off the list of challenges, Trevor has a significant leg length asymmetry (2.5″) that can also make it difficult to work with an exoskeleton.” No matter—the team was up to the task to build exactly the robotic system Greene needed.

Sparrey says such systems sell for $80,000 to $100,000. While expensive, there are multiple other benefits to being upright than the obvious positioning and mobility. “While that may seem expensive for an individual, the improvements in health metrics —improved circulation, digestion, bowel/bladder function, sleep, reduction in pressure sores—all mean that the user spends less time in hospital,” Sparrey said. She suggests that robotic exoskeletons should not only be considered useful for training and rehabilitation but that it be considered preventative health technology too.

The Royal Canadian Legion, which handles the country’s veteran affairs, raised the money for Greene’s medical expenses through its sale of poppies, which are worn as a symbol of remembrance to those who died in service to the country. The Legion raised $123,000 for Greene’s expenses in three months, handily clearing a goal of $100,000.

Still, Greene’s goal is to not only walk unaided in the future but to climb to Everest base camp with his neurologist one day. It may be a matter of training his brain to rewire itself, and that’s a pursuit in which the ReWalk will prove itself invaluable. 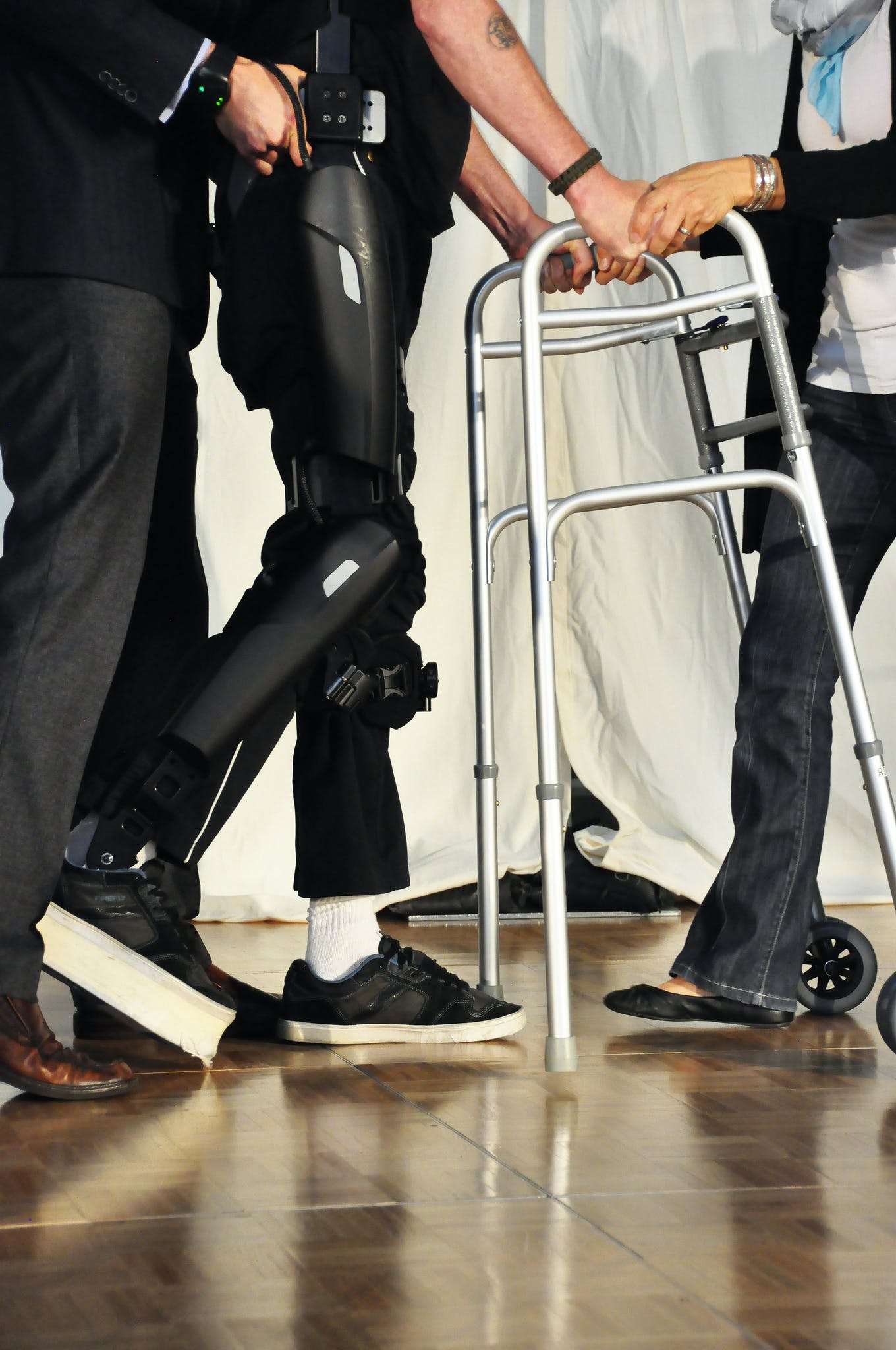