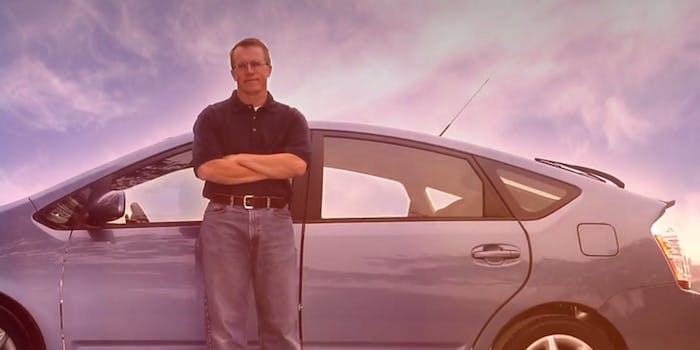 We can't make this stuff up.

“Republicans are people too.”

Well, yes. They are. It would be pretty alarming to discover that 30 percent of the of the U.S. population was made up of, say, robots or ghosts. But if this new marketing campaign is anything to go by, the “Republicans are people” message is something that actually needs advertising.

And apparently the best way to get that message across is in a YouTube video proclaiming that “Republicans drive Priuses” and “Republicans read the New York Times in public.”

Amazingly, this isn’t a parody. It’s an actual campaign, created by one of the advertisers who worked on Mitt Romney’s 2012 presidential bid. The campaign mostly focuses on social media outreach; this Twitter account, for example, has a grand total of 47 followers. The idea is that people post selfies under the #ImARepublican hashtag, highlighting one of their non-stereotypically Republican traits. Such as… drinking almond milk?

You can sort of see where this attempted image makeover is coming from. Obviously the Republican party can’t entirely be made up of angry Fox News commentators and old white male politicians, and some Republicans find those stereotypes very annoying.

The problem is, this social media campaign is clunky and awkward, and it’s inevitably attracting the wrong kind of responses. Such as “Republicans commit war crimes,” which already appears on the first page of photos on the Republicans Are People Too Facebook community, and what appears to be more satirical Twitter replies than real ones.

“If it’s a legitimate rape, the female body has ways to try to shut that down.” – @ToddAkin #ImARepublican

Screencap via Republicans Are People Too/YouTube