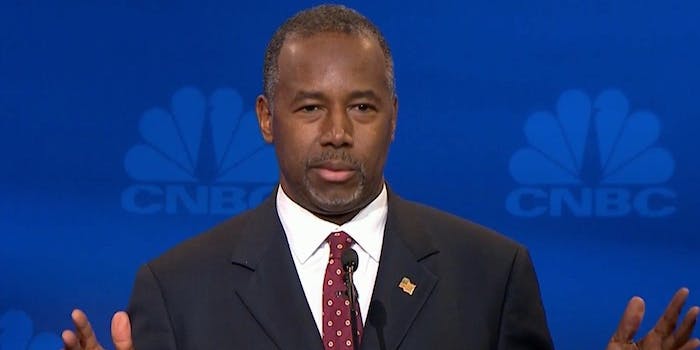 Some of these candidates are stretching the truth.

Energy and urgency hit hard during the third Republican presidential debate Wednesday night. With primary votes beginning in less than 100 days, all 14 candidates performed knowing that the stakes are being raised and the field will soon be narrowed.

While the previous debates were dominated by frontrunner Donald Trump, the spotlight was more broadly spread out, giving each candidate a chance to make their case.

Here are our fact checks on the key statements from Wednesday night’s debate.

However, the claim that the U.S. lost two million manufacturing jobs since 2009 is untrue. Actually, that’s about as many jobs as were lost from 2005-2009.

In fact, manufacturing jobs have grown during Obama’s term. The problem is that they’ve grown slowly and far under Obama’s own stated goals.

The other clear target of the night was Hillary Clinton.

George Pataki claimed that Clinton’s use of a personal email server disqualifies her from being president, saying that the act got her hacked.

There are widespread security concerns about Clinton’s actions with her emails while she was secretary of state. She was undoubtedly targeted by hackers, although that’s not necessarily anything unique when you consider the sheer number of phishing attacks thrown against the personal email inboxes of average people.

Pataki overstepped, however, when he said a hack took place. There’s no proof that such a hack happened. But investigations into her emails are continuing, so this story isn’t over yet.

Sen. Ted Cruz (R-Texas) and Carly Fiorina both took aim at Obama on how well his economy has worked for women.

These two particular points, which both Cruz and Fiorina made and repeated, are false. The median wage for females has risen more than 13 percent in the last eight years, according to the Labor Department.

The claim that 92 percent of jobs lost during the Obama administration belonged to women doesn’t reflect the reality of the financial collapse, which ultimately caused more men to lose their jobs than women.

When Sen. Lindsey Graham (R-S.C.) was explaining how he would bring business back to America, he said the American corporate tax rate ranks No. 2 in the world at 35 percent.

On one hand, that is in the right ballpark when it comes to the number as it’s written in law.

In reality, the number is much lower because of tax credits, tax havens, and other loopholes that lowers the rate to around 12 percent for America’s biggest corporations.

The theme of Wednesday’s debate was the economy, so it was no surprise when one particularly lively skirmish between Trump and Ohio Gov. John Kasich brought in Kasich’s work at Lehman Brothers during the 2008 financial collapse.

Trump was in some ways right when he pointed to the involvement of Kasich, who was an investment banker and manager at the firm during the financial collapse. But Trump overstated Kasich’s position dramatically by saying he was on the board of the company. Kasich took that mistake and defended himself truthfully.

To support his case, he once again stated that the U.S. is borrowing a million dollars a minute. Borrowing for the federal government can be a complex process to fully understand, so no one soundbite can really sum it up, but Paul’s statistic is both true and effectively speaks to the size of the government.

Louisiana Gov. Bobby Jindal started his night with almost exactly the same assertion he made in the last debate about cutting his state’s budget. A closer look shows that his claims are highly exaggerated.

Midway through the debate, Ben Carson faced pointed questions about his connections to a Texas medical supplement company that’s been criticized by a range of researchers and the Texas attorney general for making false claims about their products.

Carson said he had never had any connection with the firm, though he did like their product. Claims to the contrary are propaganda, he argued.

In fact, Carson was a fixture in commercials like this one for the company.