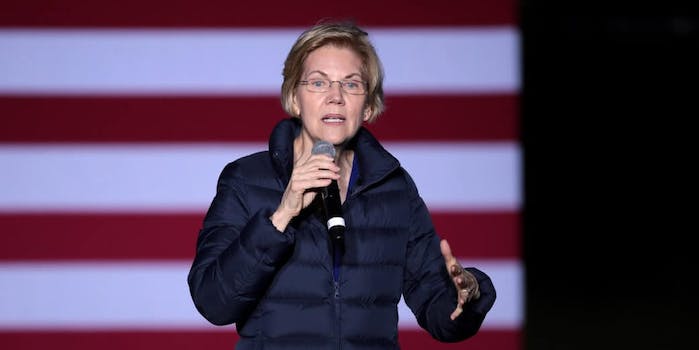 It comes down to who you believe.

Yesterday, the Daily Dot reported that the longstanding truce was off between Sens. Elizabeth Warren (D-Mass.) and Bernie Sanders (I-Vt.).

Warren seems to have decided to fight fire with fire following reports that Sanders’ campaign was going negative against her, because a story came out that said Sanders told Warren at a private meeting in 2018 that a woman couldn’t win the presidency in 2020.

Warren herself later confirmed the story. If true, such has the potential to alienate a large swath of Democratic voters who may otherwise have voted Sanders.

Sanders, however, refutes the reporting, which first appeared on CNN, and accused Warren’s campaign of lying. Warren has not backed down.

Given a choice between whether to believe Sanders or Warren, many chose the former. Overnight and into the morning #RefundWarren and #ITrustBernie trended on Twitter.

Those tweeting #RefundWarren claimed to have requested her campaign return their donations. Some included screenshots of confirmation emails. Others said that they’d received automatic responses from campaign donation platform ActBlue stating that it was experiencing an abnormally high volume of refund requests.

Haha #RefundWarren is trending and Act Blue is claiming a "higher volume than normal" to requests for refunds tonight. You really don't hate to see it.

#RefundWarren
Elizabeth Warren's plan to get attention is going exceedingly well. No one will forget the first negative donation day in history. Brilliant move. https://t.co/vBxx4vypVh

Case-in-point: #RefundWarren and #ITrustBernie are the two most trending hashtags right now.

Can’t help but feel Warren made a grave miscalculation.

A Twitter account with the handle @RefundWarren, which launched in 2015 but appears to have either been dormant or deleted all its tweets prior to Dec. 12, 2019, took up the standard of collecting tweets using the hashtag.

Some suspect that the hashtag didn’t come about organically, but was launched or promoted by either the so-called Bernie Bros or Russian troll farms.

For others, the onslaught called to mind the 2016 presidential election, which featured vicious attacks against the Hillary Clinton campaign by Sanders, his proxies and obsequious Bernie Bros. Many have called these attacks misogynistic, an allegation that Warren’s fans are now echoing.

“Thanks Bernie Bros for reminding me what misogynistic jerks you are,” tweeted @Marguerite0131.  “Just donated another $50 to Warren in response to all the Bernie Bros trying to trend #RefundWarren,” @MalachiteXIII added. “Get bent, misogynistic a**holes.”

Sanders’ fans pushed back against assertions of misogyny.

Warren’s supporters continued to pledge donations in light of the controversy.

I just made another donation to @ewarren. She’s my #2 candidate but I cannot stand to see Bernie Sanders and his Bernie Bros doing the same thing misogynistic shit they did to Hillary Clinton. He could stop this at any time. This is not leadership. #RefundWarren pic.twitter.com/JMUZ5OTJY0

Sanders and Warren will likely have to address the matter head-on at tonight’s Democratic presidential debate.