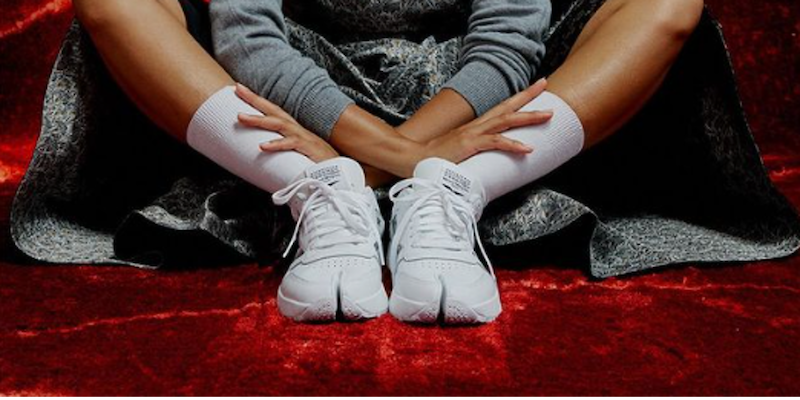 The theory falls apart under the slightest scrutiny.

A conspiracy theory spreading across social media claims that a pair of shoes recently released by Reebok are “Satanic.” But the theory falls apart under the slightest scrutiny.

In a post on Instagram, the shoe, known as the Reebok Classic Leather Decortiqué Tabi Low, is described as “a revolution of artistic and evolutionary proportions.”

The Facebook page “Prophecy News” told its more than 635,000 followers that the months-old shoes were intended to resemble the hoofed feet of Baphomet, the goat deity often associated with the occult.

Prophecy News, which believes the end of the world is near, warned its followers against wearing the shoes.

“Reebok’s new sneakers have the Baphomet goat feet,” the Facebook post says. “The rulers of this world show more and more openly and clearly who they worship. Make sure to open your eyes, and don’t be caught up in their rituals.”

Ever since, Reebok’s Instagram post from January has been inundated with comments from those who believe the shoe company is idolizing the devil.

Images of the shoes also made their way to Twitter, where others similarly protested Reebok.

“Reebok has baphomet shoes?!?!” one Twitter user questioned. “I had to do a quick search to see if it was true….that Reebok made a satanic goat shoe. How disappointing that they are part of the club.”

The shoe’s design, however, has nothing to do with the occult. As is openly stated in the name, the shoe is based on the traditional Japanese footwear known as Tabi. The shoes, which date back to the 15th century, are known for their unique split between the big toe and the other toes.

Despite the logical explanation for the shoes’ origins, Prophecy News has declined to remove its conspiratorial post. Rest assured, wearing Tabi-inspired shoes will not cause you to become part of any Satanic rituals.

The conspiracy theory concocted over Reebok’s shoes shows how even months-old stories can suddenly go viral.

A quick search for more information on the shoes would have undoubtedly showed their Japanese roots.