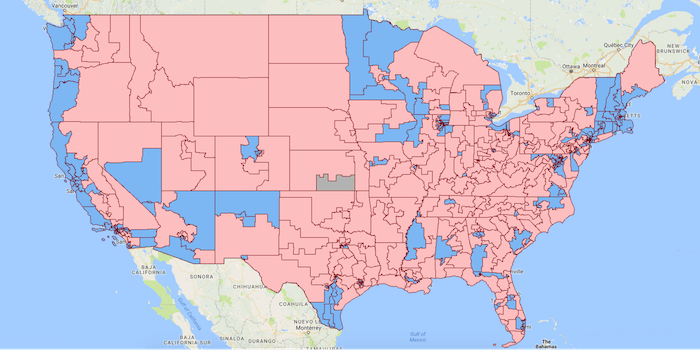 A document haul reveals the roots of the campaign.

On Monday, the Supreme Court denied requests by Republicans to stop Pennsylvania from redrawing its congressional districts, after it was found the map unfairly favored conservatives.

The startling document haul from the Republican State Leadership Committee unveils the behind-the-scenes story of how the plan came about and shows how, as early as 2008, Republicans were planning for the post-2010 redistricting.

The plan was announced with a presentation made at the 2009 Republican Legislative Campaign Committee’s national meeting in June by Thomas Hofeller.

The keynote, titled Redistricting 2010: Preparing for Success, was delivered to delegates in attendance and laid out the plan to wield the gerrymander in a way that would give conservatives dominance in states and Congress. He then unveiled a “redistricting table.”

“Along with Lynn Westmoreland, a Georgia congressman, he laid out the details,” writes David Daley, former editor-in-chief at Salon and author of Ratf**ked: Why Your Vote Doesn’t Count.

“The party would target control of state legislative chambers that either party held by five or fewer seats. They’d double down on states where the governor had veto power over the maps. And there would be plenty of money to fund key campaigns, upgrade technology, recruit and train candidates—and then to guarantee that every state legislature had a redistricting lawyer and litigator.”

The documents go on to reveal that the money to fund the strategy started coming in early 2008. By 2010, it was a core selling point in presentations to big money donors.

Ed Gillespie of the RSLC, speaking to donors, would lay out in detail how with a $31.5 million investment, Republicans could target 107 state legislature races in 2010 across 16 states in order to “fully control or affect the drawing of 9 new congressional districts.” The strategy, Redistricting Majority Project, was abbreviated as REDMAP.

“There is a lot at stake this year with state election results determining which party will draw U.S. House district boundaries in 2011,” Gillespie wrote to those invited to a redistricting breakfast. “What happens in state legislative races in 2010 will directly impact and shape the political landscape in Washington for the next 10 years.”

It worked. In his article at Salon, Daley describes how during the Obama-era Democrats lost more than 1,000 state legislative seats across the country.

REDMAP’s success is also why Republicans are so adamant to defend Pennsylvania and stop the redrawing of state districts ahead of the 2018 midterm elections. As Gillespie simply put it in his presentations, the Republicans know that “maps matter.”

Read the whole story at Salon.