New Reddit CEO Steve Huffman hosted an Ask Me Anything session on Thursday, during which he released information about the site’s future plans to censor content and fielded questions from the community about how the site will change moving forward. In essence, the rules won’t change much of anything—while some controversial subreddits will blink out, Reddit will let many others continue to exist, sweeping them under a login-required rug.

Redditors arrived prepared with questions, some running thousands of words, illustrating just how seriously the community is taking the threat of bans and censorship in the wake of former CEO Ellen Pao’s departure.

In response to the questions asked by concerned redditors over whether or not certain subreddits will be banned—including the controversial racist hub r/CoonTown—Huffman stated that subreddits not actively encouraging violence will remain on the site. So subreddits like r/RapingWomen will be banned, while r/CoonTown remains active.

Reddit will place NSFW-like content that “violates a common sense of decency,” and is undefinable yet includes hate speech and graphic content, behind a wall, letting users self-select into the hate groups with Reddit logins while the rest of Reddit remains (theoretically) blissfully ignorant of their existence. Huffman made it clear Reddit will not make money off advertising in these forums.

If we’re assuming Huffman’s policy example (r/CoonTown versus r/RapingWomen) will be implemented moving forward, it appears that Reddit might do a superficial sweep for subreddits with verbs or calls to action, banning those flagrantly awful enough to raise an eyebrow. Others that invite hate speech or the sexualization of dead people will remain unaffected.

The various hateful garbage fires that burn bright on Reddit will be nominally hidden from the rest of humanity, but the platform remains complicit in their existence. Since Reddit won’t be making money off advertising for these no longer public-facing subreddits, the company is effectively subsidizing hate speech by paying for them to exist.

Among social networks, Reddit’s new policy is confusing and likely ineffective. Despite controversy around Twitter’s harassment policy, the company says it takes abuse seriously, and will permanently ban users who are regularly reported for harassment that includes inciting violence. Facebook also happily bans users who don’t abide by its terms of service, even in misguided instances.

But what will become of the “controversial” content that lingers on its Reddit’s newly carved out gray areas? Like the huge network of racist subreddits that users refer to as “the chimpire,” all of which are filled with hate speech, some managed by users that boast Swastika icons next to their usernames? Many of the posts in these subreddits have a particularly violent undertone. Reddit user Mach-2 compiled them in a list for Huffman. Again, Reddit’s users are doing the company’s work for it.

While racist hate speech thrives, subreddits like r/CuteFemaleCorpses and r/picsofdeadkids exist uncensored as well. One redditor made a list of these other controversial subs when r/fatpeoplehate was banned in an effort to draw attention to Reddit’s seemingly hypocritical banning decisions. 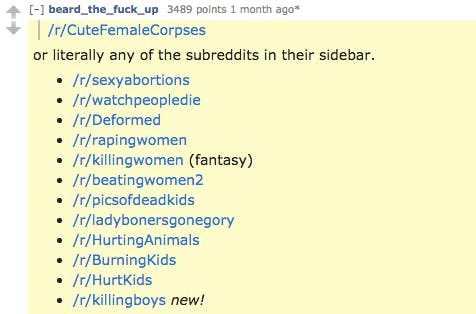 This list has a few subreddits that fit Huffman’s requirement of “encouraging” people to commit violence in order to be banned—perhaps an arbitrary rule could lead to Reddit simply banning subs with the suffix “-ing.”

Despite the outrage about banning subreddits as of late, past actions might lead a casual observer to believe the site does, in fact, care about maintaining some sense of decency. In 2012, Reddit removed r/Creepshots, which caused a similar spate of drama for the site regarding free speech versus privacy. It also shutdown r/beatingwomen in 2014, though the ban was short lived—r/beatingwomen2 now exists.

Up until very recently, Reddit bans neglect to conform to any sort of pattern. It could be argued that recently banned r/fatpeoplehate was just as offensive or harmful to people as any one of the aforementioned “chimpire.” And yet they all still exist.

Huffman tried to clear up Reddit’s policies on Wednesday, but his statements only made the site’s future even murkier. If these rules stand, Reddit will continue to cultivate rape culture, racist neo-Nazism, and violence—but just place it behind a velvet rope.