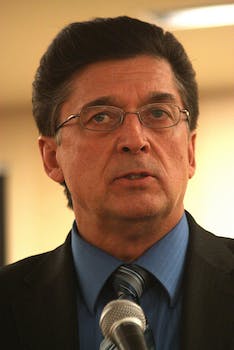 The social news community is backing Richard Mack, a political unknown, in an attempt to make Congressman Lamar Smith pay for his support of a pro-copyright bill.

Redditors have launched a campaign to remove Rep. Lamar Smith (R-Texas), the author of the reviled Stop Online Piracy Act, from office.

It’s an ambitious but logical goal for users of the site, who raised money this month for previously unknown candidate Rob Zerban, simply because Zerban’s opponent, Representative Paul Ryan (R-WI), was thought to endorse SOPA, a pro-copyright bill that critics claimed would threaten the very existence of sites like Reddit. Redditors spearheaded an anti-SOPA Internet blackout campaign two weeks ago.

Smith is firmly entrenched in Congress. He’s won reelection every time he’s run for office since first assuming his seat in 1987, and now chairs the House Judiciary Committee. In fact, he was an early target in the same Reddit thread that eventually endorsed Zerban, but redditors deemed him too tough an opponent.

“He’s a tool, but his district is very heavily GOP. I think with him, we might be better off targeting his contributors,” one redditor wrote of Smith.

The redditors’ plan is to support Smith’s main opponent, Sheriff Richard Mack. He’s running as a Republican in Texas this year, but has previously run for U.S. Senate in Arizona as a libertarian.

For his part, Smith called Wikipedia’s decision to black out its site to protest SOPA a “publicity stunt”—the kind of talk that’s just served to rile up opponents.

“He isn’t great—but his views, despicable to us as they are, align with Texas pretty well, so he has a chance,” wrote redditor hiddensage.

Mack’s supporters have already started a subreddit, or section of the website, devoted to his election. Redditors from California to Indiana have volunteered time to help his campaign. And Mack’s campaign has announced on Reddit that the candidate will do a Q&A with the site’s users soon.

“Fund his opponent Sheriff Mack, and make Lamar Smith a lame duck example in the Halls of Congress,” it says.

So far the site has only raised forty of those bucks, out of its stated goal of $100,000. Still, considering Rob Zerban has credited Reddit with jumpstarting the $500,000 in campaign contributions he’s seen so far, Mack is tapping into enormous potential.