Why are we not surprised?

This article, and many of its linked pages, contains racially charged language.

One of the nice things about Reddit is that any user of the site can instantly create any community they so desire with the push of a button. Want to make a subreddit for vinyl-record obsessives or people who get strange joy from Photoshopping human arms onto pictures of birds? The power is yours.

With that in mind, you might want to pop over into the newly created r/Eric_Garner subreddit, which is intended to host discussion about an black New York City resident who was fatally strangled by an NYPD officer for selling lose cigarettes on the sidewalk.

Who created it? A bunch of racists.

On Wednesday, a grand jury in New York City declined to indict Daniel Pantaleo, the officer who killed Garner, which is what undoubtedly sparked this subreddit’s creation—along with large-scale protests in New York City.

R/Eric_Garner is not a particularly popular place. As of Thursday morning, it only had seven posts, five subscribers and a dozen people actively reading it. While Reddit isn’t exactly the most tolerant place on the Internet when it comes to race, it’s unlikely the community will gain much traction.

However, what’s interesting here is that it shows how a group of white supremacist redditors are making a concerted effort to snap up subreddits about racially charged topics—most notably a string of cases where black men have been killed by authority figures in a way that many around the country view as unjustified.

R/Ferguson is part of network of white supremacist subreddits dubbed “The Chimpire.” Here’s what it looked like on Thursday morning: 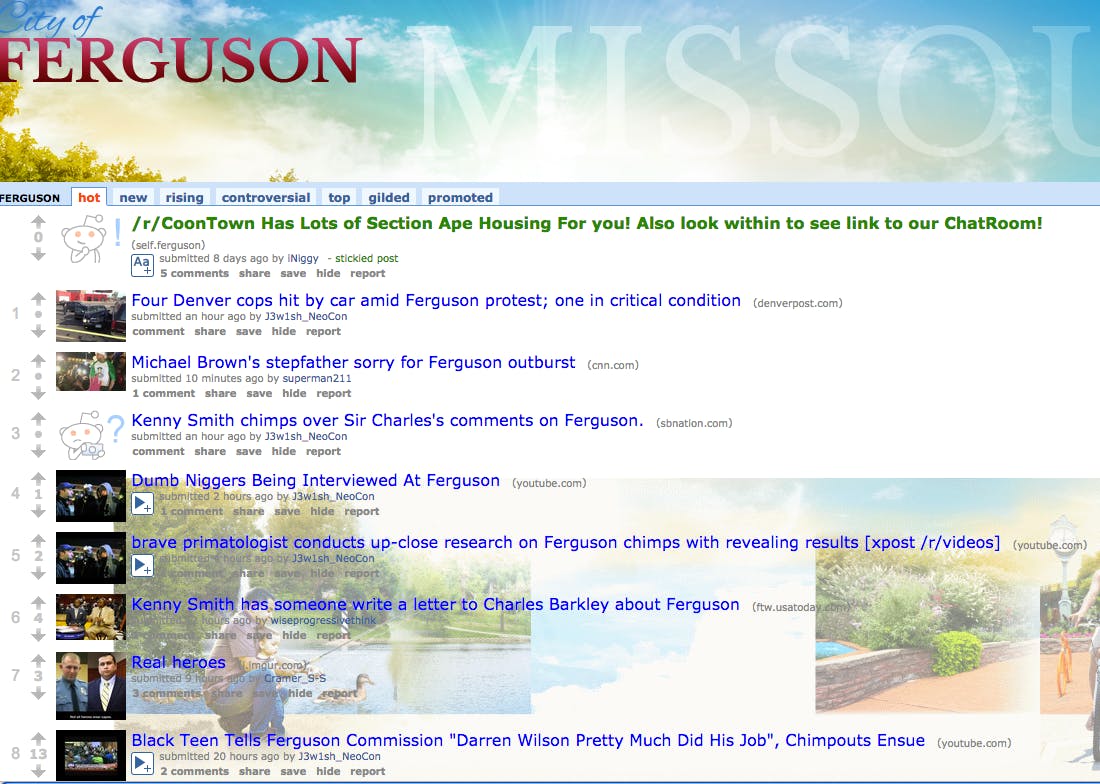 Reddit’s management likes to think of the site as a self-contained island of unmitigated free speech. Moderators and administrators don’t censor content based on the views of the user; they act against community members who violate the site’s few (vague) rules, like not posting the personal information of other users. So it’s unlikely any of these subreddits will be banned just for being packed with explicit racism.

This stance has drawn criticism from users who feel that permissiveness encourages harassment of women and minorities. It also once led geek icon William Shatner to slam the site in an AMA:

Reddit has been the first ‘mainstream’ site that I have been to that actually appears to allow racists and other hate mongers to group, congregate, incite and spread their hatred. There’s entire subreddits that allow it. What mainstream sites do you think are more racist?
…
I don’t pretend to know where the managers of Reddit wish to go with this site, but embracing that kind of culture I feel is counterproductive to where this world is heading and I think that is probably hurting this site.

Because the r/Eric_Garner subreddit is basically just terrible trolling, people who want to have actual discussions about the incident have gone elsewhere. Posts about Garner have flowed to subreddits like r/news, r/television, r/videos, r/politics, the anti-police r/bad_cop_no_donut, and the pro-police r/ProtectAndServe.

Ultimately, the moral of this story is probably that if redditors want to create serious spaces for discussions about controversial topics, they’re probably going to have to start being quicker on the draw when it comes to registering new subreddits.