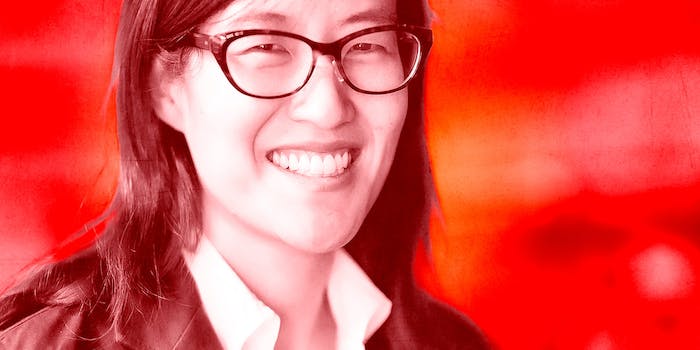 Pao's departure was initially cheered by redditors who thought she was pushing for censorship.

On Tuesday afternoon, newly installed Reddit CEO Steve Huffman, who co-founded the company with Alexis Ohanian a decade ago, made an announcement: The site was in the process of formulating a new comprehensive content policy, one that would result in the closure of several communities he called “reprehensible”—likely including the one where users trade tips on how to become more effective rapists.

In the process, Huffman wrote that “neither Alexis nor I created Reddit to be a bastion of free speech, but rather as a place where open and honest discussion can happen.”

A number of users took great joy in pointing out that Ohanian had used precisely that “bastion of free speech” language in 2012. Catching a famous person in an outright lie is basically the highest level of pleasure the average Redditor is capable of experiencing. But there was someone else chiming in on the thread whose comment appeared to be the definition of catharsis: former Reddit CEO Yishan Wong.

Wong left Reddit in 2014 due to a dispute over the location of the company’s offices, and he largely remained quiet after his departure. But following the termination last week of his replacement, former interim Reddit CEO Ellen Pao, Wong became increasingly vocal in his criticisms of both Reddit’s leadership and the vocal members of the Reddit community who spent months calling for Pao’s ouster.

Pao was vilified by a vocal segment of the Reddit community for banning a handful of subreddits, most notably r/FatPeopleHate, for encouraging harassment. Many viewed the shuttering of those communities as an effort to crack down on the ideal of unfettered free expression that supposedly sits at the core of Reddit’s mission.

According to Wong, though, not only was Reddit not originally envisioned as a laissez-faire haven for unrestricted user behavior, but contrary to what her critics believed, Pao actively defended users’ ability to create and maintain unquestionably offensive communities despite objections from the company’s board of directors.

Wong recalled a conversation he had with Huffman prior to Reddit’s 2013 decision to ban subreddits like r/creepshots where users posted sexualized pictures of women on the street without their consent.

Well, when things were heating around the /r/creepshots thing and people were calling for its banning, I wrote to him to ask for advice. The very interesting thing he wrote back was “back when I was running things, if there was anything racist, sexist, or homophobic I’d ban it right away. I don’t think there’s a place for such things on reddit. Of course, now that reddit is much bigger, I understand if maybe things are different.”

I’ve always remembered that email when I read the occasional posting here where people say “the founders of reddit intended this to be a place for free speech.” Human minds love originalism, e.g. “we’re in trouble, so surely if we go back to the original intentions, we can make things good again.” Sorry to tell you guys but NO, that wasn’t their intention at all ever.

Wong went on to take responsibility for not formalizing a content policy during his tenure that laid down clear lines about what was acceptable and what wasn’t. Without those rules of the road, the site has developed a notoriously toxic culture. A survey conducted earlier this year found that only 58 percent of women and 69 percent of men were satisfied with Reddit’s tone and environment.

Wong noted that, on more than one occasion, Reddit’s board of directors pushed Pao to issue a universal, wide-ranging ban on a litany of offensive, hate-filled subreddits. But, he said, Pao pushed back, arguing that such a sweeping action would have enraged the community. That decision proved prescient, because the company’s decision to close a small group of subreddits that were hives for harassment—a move attributed to Pao but since revealed to be the work of others—provoked a massive backlash.

Wong argued that the Reddit community’s rage at Pao was supremely ironic, because, in more ways in one, her function at the company was to protect the ability of redditors to more or less post whatever they wanted.

Ellen was more or less inclined to continue upholding my free-speech policies. /r/fatpeoplehate was banned for inciting off-site harassment, not discussing fat-shaming. What all the white-power racist-sexist neckbeards don’t understand is that with her at the head of the company, the company would be immune to accusations of promoting sexism and racism: she is literally Silicon Valley’s #1 Feminist Hero, so any “SJWs” would have a hard time attacking the company for intentionally creating a bastion (heh) of sexist/racist content. She probably would have tolerated your existence so long as you didn’t cause any problems – I know that her long-term strategies were to find ways to surface and publicize reddit’s good parts – allowing the bad parts to exist but keeping them out of the spotlight. It would have been very principled – the CEO of reddit, who once sued her previous employer for sexual discrimination, upholds free speech and tolerates the ugly side of humanity because it is so important to maintaining a platform for open discourse. It would have been unassailable.

As one Redditor immediately asked, “So Ellen Pao was Severus Snape all along?”

Wong also recently said that that the abrupt firing of popular Reddit administrator Victoria Taylor—whose termination sparked a nearly site-wide moderator strike in which over 1,400 subreddits voluntarily went private—wasn’t Pao’s decision, even though it was the incident that triggered her departure.

Instead, Wong alleged, the call came from Ohanian, who let Pao take the fall for his misreading of how the Reddit community would react to Taylor’s departure.