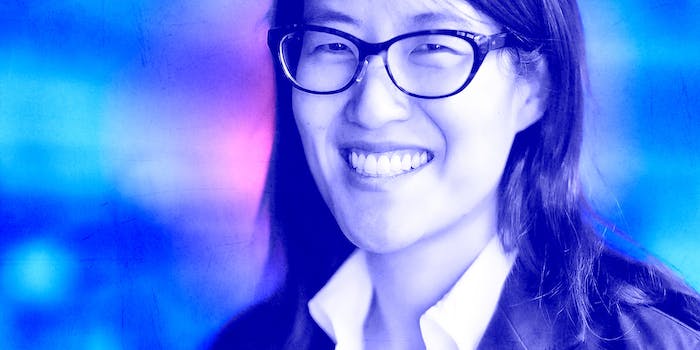 Did Ellen Pao take the fall for her superior's mistake?

On Friday, Reddit Interim CEO Ellen Pao stepped down from her position leading the social news site. Pao’s tenure at Reddit was rocky from the beginning. But, it was the termination of popular Reddit employee Victoria Taylor that ultimately led to Pao’s ouster.

“It was my decision to change how we work with AMAs and the transition was my failure and I hope we can keep moving forward from that lesson,” Ohanian wrote.

Taylor’s firing enraged much of the Reddit community. She was one of the site’s most public and responsive employees. She was such an integral part of running the AMA subreddit that, when she unexpectedly left, the moderators of that community temporarily shut it down in protest. That protest quickly grew to include the shuttering of more than 1,400 subreddits.

The blame was almost universally placed at the feet of Pao, already under fire for an attempt to stop harassment on the site, who was forced to leave shortly thereafter. (Pao was replaced by Steve Huffman, one of Reddit’s original founders.) Even though the decision about Taylor’s employment may have been left up to Ohanian.

In a post late Sunday, former Reddit CEO Yishan Wong, who parted ways with the company last year due to a disagreement about office space, charged that Ohanian had essentially let Pao take the blame for his screw-up:

I’m glad redditors have started to piece together all of this. Here’s the only thing you’re missing:

It travels upstream, except when it comes from the CEO’s boss.
Alexis wasn’t some employee reporting to Pao, he was the Executive Chairman of the Board, i.e. Pao’s boss. He had different ideas for AMAs, he didn’t like Victoria’s role, and decided to fire her. Pao wasn’t able to do anything about it. In this case it shouldn’t have traveled upstream to her, it came from above her.

Then when the hate-train started up against Pao, Alexis should have been out front and center saying very clearly “Ellen Pao did not make this decision, I did.” Instead, he just sat back and let her take the heat. That’s a stunning lack of leadership and an incredibly shitty thing to do.

I actually asked that he be on the board when I joined; I used to respect Alexis Ohanian. After this, not quite so much.

Ohanian chimed in with a comment saying that, even though he was the Chairman of the Board at Reddit, he still reported to Pao as CEO.

I can lighten up a bit…given that in-one-capacity you weren’t her boss, but I am still extremely disappointed in you.

It wasn’t “we didn’t handle it well” – Ellen actually handled things very well, and with quite a bit of grace given the prejudices arrayed against her and the situation she was put in – you didn’t handle it well. There was tremendous amounts of unnecessary damage done as a result, and we are only able to say that things might turn out ok because Huffman agreed to return and take up the mantle.

In one sense, the subreddit blackout that led to Pao’s leaving the site was a direct result of Taylor’s firing. However, in a deeper sense, tensions between Reddit’s employee administrators and its most engaged users, the volunteer moderators who manage each of the site’s thousands of subreddit communities, have been rising since long before Pao took the reigns last year.

Moderators of the r/ExplainLikeImFive subreddit, which elected not to shut down in the strike, told the Daily Dot that Reddit’s administration hadn’t given them the tools necessary keep toxic trolls out of their community and were largely unreceptive to individual complaints.

“Many…[moderators] have to deal with users who will repeatedly harass the moderators and their users, even when banned, as they can just create another account. There are features that could be implemented to aid in their removal from the site, but the admins have never made an effort to work on that,” a moderator going by the handle u/teaearlgraycold told the Daily Dot via email. “Every time these issues are brought up the admins claim that solutions are on the way, or that they’ve had people working on it, or that they’ll take our ideas into consideration. But they have time after time resisted input on [R]eddit’s codebase (through what are known as pull-requests) that would add functionality or fix bugs, which leads me to believe they don’t care about our input. The lack of new moderation tools shows that they aren’t working on anything….Basically—we’re sick of being lied to.”

“We can not stop any one human from completely halting our moderation without admin intervention – which can take hours,” u/teaearlgraycold added. “In one instance a few months ago a belligerent user spent a few hours copy-pasting hundreds of pages of scripture into modmail, effectively making each moderator’s modmail feed (which includes messages from every subreddit they moderate) unusable.”

Last August, the moderators of the subreddit r/BlackLadies penned an open letter to the site’s administrators begging for better tolls to deal with trolls flooding their community with “hateful, racist messages and links to racist content, which are visible until a moderator individually removes the content and manually bans the user account.” The letter, which was co-signed by the moderators of more than 40 other subreddits ranging from /r/blackgirlgamers to r/marxism, urged admins to give moderators a way to better police content, which takes lots of time and even more mental and emotional energy.

“We need a proactive solution for this threat to our well-being. We have researched and understand Reddit’s various concerns about disabling downvotes and restricting speech,” the letter continued. “Therefore, we ask for a solution in which communities can choose their own members, and hostile outsiders cannot participate to cause harm.”

The writers of the open letter never received a response from Reddit.

These issues, many of which represented the core complaints moderators had against Reddit’s leadership, predated Pao’s tenure. Yet, due to Pao’s closure of five subreddits (most notable r/FatPeopleHate) that the Reddit administration saw as breeding grounds for the harassment of other users and a high-profile gender discrimination lawsuit she filed against Silicon Valley venture capital firm Kliner Perkins, much of the site’s overwhelmingly white and male user base began directing all of its anger at Pao. She became the symbol for a team of administrators who users no longer saw as particularly responsive to their complaints.

In addition to circulating online petitions to kick out Pao, some redditors were so desperate for Pao’s ouster that they even wrote fan fiction about it. In the r/WritingPrompts subreddit, where users pen short stories based on brief prompts suggested by others, a handful of redditors responded to the prompt: “You’re the Interim CEO of a major internet company. Every decision you make seems to just go completely wrong.”