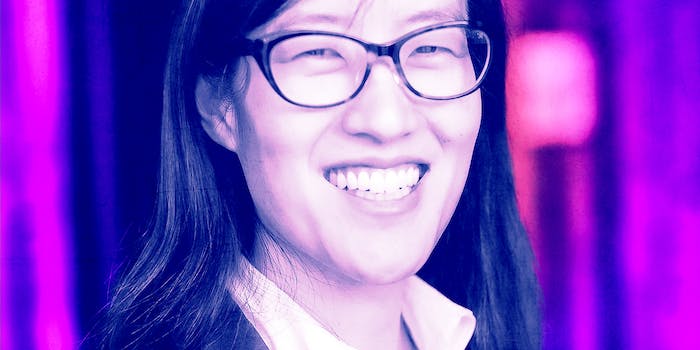 'The good has been off-the-wall inspiring, and the ugly made me doubt humanity.'

Ellen Pao, the controversial interim Reddit CEO whose tenure oversaw an outright rebellion from many of the unpaid moderators who help run the site’s biggest communities, has resigned, the company says.

“In my eight months as Reddit’s CEO, I’ve seen the good, the bad and the ugly on Reddit,” Pao said in a statement posted to the site. “The good has been off-the-wall inspiring, and the ugly made me doubt humanity.”

In a statement posted to the site’s official r/announcements section, Sam Altman, who sits on Reddit’s board, said that those moderators “are what makes reddit great,” and that redditors as a whole “deserve clarity about what the content policy of reddit is going to be.”

“The good has been off-the-wall inspiring, and the ugly made me doubt humanity.”

One of Reddit’s original founders, Steve Huffman, will return to the company to replace Pao as CEO. Its other cofounder, Alexis Ohanian, returned to the site as executive chairman in 2014.

The so-called “front page of the Internet” is phenomenally popular, logging 163 million unique visitors in June, though it’s had trouble finding a way to turn that into a profit. Pao’s brief tenure, however, easily marks the period with the most open conflict between the company’s employees and users.

In particular, moderators rebelled against the company’s reported decision to fire Victoria Taylor, who helped a number of celebrities, including President Obama, to use the site’s r/IAmA (Ask me anything) section, opening them up to questions from everyday users. Taylor had developed a much closer relationship with many moderators than Pao apparently expected, so those who ran some of the site’s biggest communities, including r/IAmA (8.5 million subscribers), r/gaming (8 million), r/movies (7.6 million), and r/videos (8 million), all locked all their content in solidarity.

Reddit is frequently scrutinized for its attempts to balance its users free speech with an attempt to avoid sheltering some of the site’s ugliest communities. Before the blackout, Pao was already the subject of threats from users over the decision to ban five subreddits for harassing behavior but leave others that make most people balk, like one with 55,000 subscribers that’s entirely devoted to showing scantily clad underage girls.

Though many redditors have called for Pao’s job, it’s impossible to separate her resignation from the death threats and the racist and sexist comments that plagued her tenure.

“[I]t was sickening to see some of the things redditors wrote about Ellen,” Altman wrote.

One commenter wrote that although it was “a shame that the users here resorted to as low a level as death threats,” he nevertheless did “wish her some level of good riddance.”

Clarification: In Reddit’s official statement, Altman characterized Pao’s departure as a resignation “by mutual agreement.” Pao said in her personal statement, “Ultimately, the board asked me to demonstrate higher user growth in the next six months than I believe I can deliver while maintaining Reddit’s core principles.”