The ex-employee is David Ehrmann (dehrmann on Reddit), a former ads programmer who worked at Reddit from July 2013 to March.

On Sunday, Ehrmann held an AMA (“ask me anything”) on Reddit to answer questions about being a Reddit staffer and “part-time receptionist, pumpkin mover.”

One of the first questions asked of Ehrmann was why he left the company. Ehrmann’s answer: He was laid off with no official explanation.

“I vaguely know how CA employment law works and that you limit your liability by not stating a reason,” Ehrmann said. “It’s also really hard to work through in your mind. The best theory I have is that, two weeks earlier, I raised concerns about donating 10 percent of ad revenue to charity. Some management likes getting feedback, some doesn’t.”

Wong responded to Ehrmann’s comment Monday afternoon and explained why he was actually fired: for “incompetence,” asking “inappropriate or irrelevant comments/questions when interviewing candidates,” and making “incorrect comments in public about Reddit’s systems.”

All of these issues would have remained a secret whether or not Ehrmann signed a non-disparagement with Reddit upon leaving, Yishan explains. But because Ehrmann decided to talk negatively about his former employer in public, he had “just forfeited this arrangement.”

“When an employee is dismissed from employment at a company, the policy of almost every company (including reddit) is not to comment, either publicly or internally,” Wong added. “This is because companies have no desire to ruin someone’s future employment prospects by broadcasting to the world that they were fired.”

Ehrmann, according to LinkedIn, currently works at Spotify as a software engineer. This public information, along with his Reddit grievances, are not a good combination, redditor Arnolds_Left_Bicep stated.

“[I]f he is laid off at some point or wants to pursue something else in the future, you’re damn right he will have a hard time,” Arnolds_Left_Bicep added. “Especially in the tech-field where most managers are logical enough to do some background on their potential candidates.”

Check out Ehrmann and Wong’s comments in all their glory below (click here to see them full size). 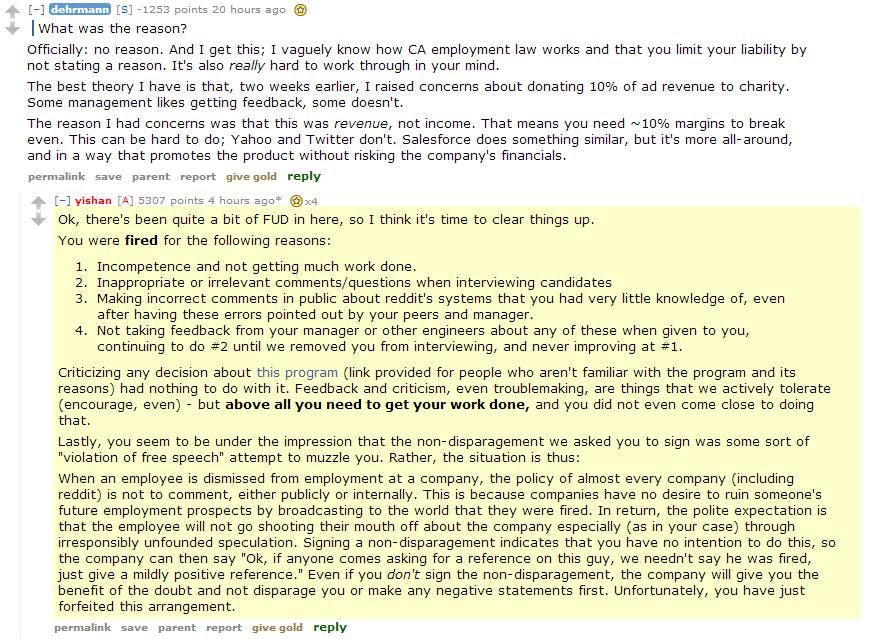