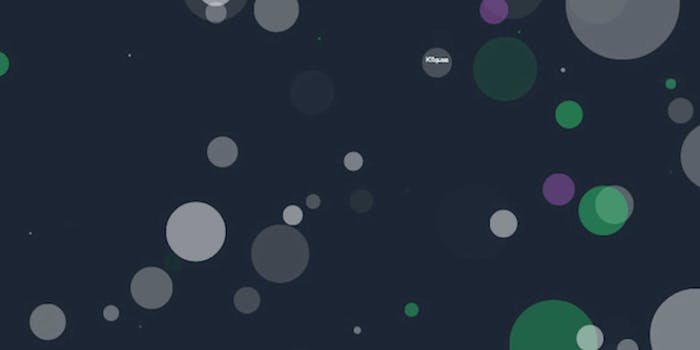 This is what change sounds like on Wikipedia—sort of.

Trust me. I’ve been listening for the last hour. It’s kind of the perfect thing for a wet, slate-grey start to August, like Music for Airports but a bit more aimless, more human.

The open-source, “hopefully-plesant audiation” of activity across the massive and collaborative online encyclopedia isn’t embeddable, so you’ll have to head over here to sink into the rhythm of change. HatNote, the folks behind Listen to Wikipedia and other similar hacks on wiki life, pulls its real-time data using Wikimon, adding in sensory markers to bring the whole thing to life: When a user adds to an entry, a bell rings. When a user subtracts from an entry, strings ring. When a user makes an anonymous edit, a green circle expands; when a bot edits, purple circles expand. White circles represent edits made by registered users.

What you get is a slow-burning melange of drone that never strays too far out into the ether. Each hit from the recent changes feed denotes the relevant entry. Here’s a random assortment of pages that I was able to pick out in the span of about five seconds:

CIA activities in the United States

This is how it happens—without warning, and with a tinge of sonder. Everything is changing, and that’s OK.