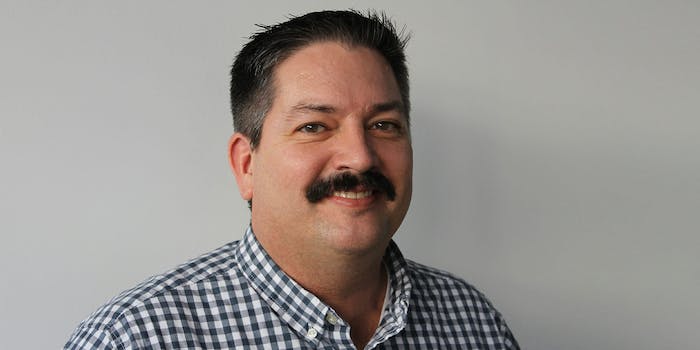 Randy Bryce, who you may know better as Randy “Ironstache” Bryce, captured the progressive imagination when he released his campaign announcement video last year. The union ironworker turned progressive political star has been the model for the kind of politics many on the left think can win. He has received national political attention, hitting the campaign trail, appearing on cable news, and making appearances with the who’s who of the progressive movement.

Who is Randy Bryce?

The only problem is that he hasn’t won yet.

Bryce’s message will be put to the test on Tuesday in the Democratic primary for Wisconsin’s 1st district, and if he wins, he will be one step closer to taking over outgoing House speaker Paul Ryan’s (R) old seat.

Though Bryce has received support from the progressive wing of the Democratic Party—Bernie Sanders has stumped for him twice—his primary contest is proving tougher than many expected. Less than a week before election day, mud is being slung and, as with almost any House race, local issues are taking center stage.

Who is Cathy Myers?

Cathy Myers, Bryce’s primary opponent, has been determined to make the contest a tight race, and to some extent, she has succeeded. Several polls put the two candidates at a virtual tie, though other polls still give Bryce a commanding lead.

Myers, a teacher, has union bonafides and grassroots experience of her own, and she isn’t exactly the kind of oligarchal figure that other progressives often find themselves up against in primaries.

Despite Bryce taking the lead in terms of prominent endorsements, Myers has been leaning on a message of refusing to “take a backseat to less qualified men.” That is a debatable claim. While Myers has served on the Janesville, WI school board, Bryce has political organizing experience of his own as a union leader. But, it is true that Myers has won local elections recently, and Bryce has lost several.

While Bryce has been more vocally progressive than Myers, compared to other races around the country, the economic policy differences between them are small. Both candidates support $15 minimum wage and Medicare for All. However, Bryce supports tuition-free public college while Myers stops short of that on her campaign site, simply calling for “more affordable” student loan payments. Bryce is the more progressive of the two on immigration, advocating an “abolish ICE” policy instead of a reform strategy; Myers would like to see ICE folded into the Department of Justice.

Myers and Bryce also come down on the same side of several local issues. Both oppose a massive proposed Foxconn factory set to come to Wisconsin. Both support organized labor on a local level, though Bryce has been a bit more critical of union leadership than Myers. Bryce supported the construction of a new stadium for the Milwaukee Bucks on the ground that it would bring jobs with a living wage, while Myers opposed it because of taxpayer subsidies used to pay for the construction.

In terms of foreign policy, sparring between the candidates has been limited, and, again, they largely agree on issues that matter most to the people of Wisconsin. Both Myers and Bryce support tariffs generally, but believe that Trump’s tariffs were poorly implemented. This is a very union-friendly position in a union-friendly district. Bryce has gone slightly further than Myers on this issue, saying he would work with Trump to keep jobs in America. Myers wouldn’t commit to working with Trump on anything.

Myers has leveled some harsh criticism at Ironstache’s personal life that has made local headlines. Her campaign filed an FEC complaint against Bryce, alleging he used campaign funds to pay off a personal debt and then accused him of falling behind on child support payments.

At a July debate, Myers also attacked Bryce for his record of previous arrests. Several of the nine arrests on his record came from protests, and the one that made the most waves was a twenty-year-old DUI charge, which also resulted in several counts of driving with a suspended license.

Myers has faced questions about her past as well. She was accused of taking advantage of an out-of-state tax credit for which she shouldn’t have been eligible, and a messy lawsuit involving her school board recently resurfaced. These alleged missteps feel relatively minor compared of the political malfeasance that goes on elsewhere in the country and is a testament to the fact that both candidates are struggling to differentiate themselves from each other as the race comes to a close.

It’s fair to say that Myers is a running on a less progressive platform than Bryce, but the race doesn’t have the same David vs. Goliath feel that you see in other races across the country. Both candidates have grassroots union experience. This is also a rare instance where the more left-leaning candidate, Bryce, has out-fundraised his challenger and collected the lion’s share of prominent endorsements.

Whoever wins will have a strong economic argument in the general election. Republican Bryan Steil, a corporate lawyer, is the likely Republican candidate, and Myers and Bryce could use their working-class background to great effect. Cathy Myers and Randy Bryce both should have no trouble differentiating themselves from a wealthy lawyer disciple of Paul Ryan.

We’ll just have to wait and see who gets the chance to tell their story.