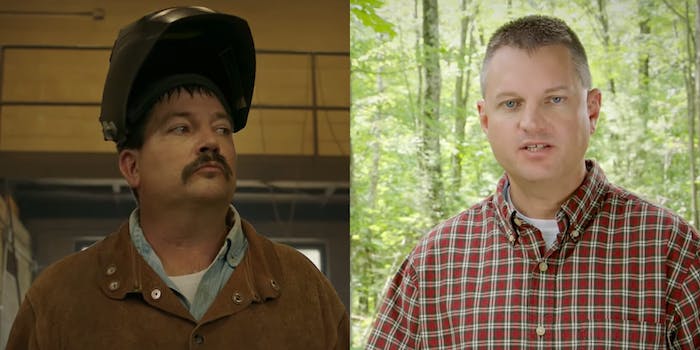 The race just got personal.

The brother of Randy Bryce, the Wisconsin Democrat known as “ironstache” hoping to take the spot of Rep. Paul Ryan (R-Wis.) in Congress, starred in an ad recently where he vehemently supports his brother’s challenger Bryan Steil.

As the midterm election draws closer, the Congressional Leadership Fund super PAC enlisted Bryce’s brother, James Bryce, who rails against his sibling’s arrest record and views on law enforcement. In the ad James Bryce draws attention to a September 2012 tweet from his brother, adding that “when people refer to police officers as terrorists, that hits a little close to home.”

Says the Democrat’s brother in the ad: “I don’t think people want to be represented by someone who’s shown contempt for those in law enforcement.”

Bryce, whose campaign got national attention after he launched it with a viral ad, may have an uphill battle to defeat Steil in their race to succeed the now-speaker of the House. A recent New York Times and Siena College poll of Wisconsin’s 1st District found Steil leading the Democrat 50 percent to 44 percent.

“Randy is the proud son of a police officer and has a deep respect for law enforcement officers, including his brother, even when they have political disagreements,” the campaign spokesperson told the news outlet.

Congressional Leadership Fund super PAC, which produced the ad, said the ad will run in the Milwaukee-area media market. The ad cost $450,000, according to Politico.

The ad featuring Bryce’s brother comes just a few weeks after the Democrat said he used silent video B-roll footage released by Steil to make his own ad called “Life of Bryan,” where he calls the Republican a “clone” of Ryan.