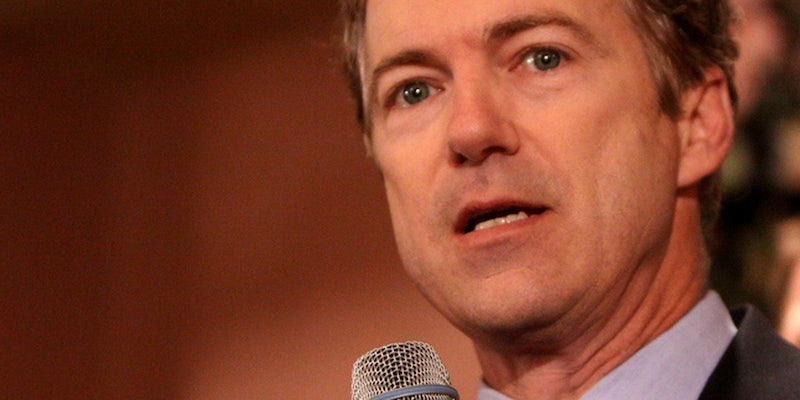 It’s easy for high school kids writing reports to simply lift info straight from Wikipedia, but would you expect it from Senator Rand Paul?

On Monday, the Kentucky senator was in Virginia, at Jerry Falwell’s Liberty University, stumping for anti-oral sex crusader and gubernatorial hopeful Ken Cuccinelli. Paul’s speech included some obscure movie knowledge, which he employed to make a point about eugenics. And that’s how he apparently ended up giving an uncredited reading from the Wikipedia page for the 1997 movie Gattaca.

Seems Paul went right for the “plot” section of the page, and proceeded to lift liberally, in order to sell his tale of the nightmarish future we face if pro-choicers have their way. One question he didn’t address: In this bleak future, will we look as fabulous as Uma Thurman and Ethan Hawke did in 1997?

Rachel Maddow had a gotcha moment last night on her show when she called out Paul’s faux pas by reading parts of his speech and nearly identical parts of the Wikipedia entry:

Wikipedia: “Due to frequent screening, Vincent faces genetic discrimination and prejudice. The only way he can achieve his dream of becoming an astronaut is to become a ‘borrowed ladder.’”

Paul: Due to frequent screenings, Vincent faces genetic discrimination and prejudice. The only way he can achieve his dream of becoming an astronaut is he has to become what’s called a ‘borrowed ladder.’”

The page’s revision history showed no changes were made between Paul’s speech and Maddow’s show, but BuzzFeed went even further into Paul’s speech vault, and found he might have also quoted the Wikipedia page for Stand and Deliver in a June speech on immigration.

As has been pointed out, no one really saw Gattaca when it was released. Fifteen years later, is Paul slyly trying to make the movie relevant again, via a speech about a future genetic nightmare caused by pro-choicers? It’s so crazy it might work. But more likely, he was hoping no one would notice.

In true Internet style, Paul’s bout of plagiarism has already been added to the Gattaca Wikipedia page, under “political references.”