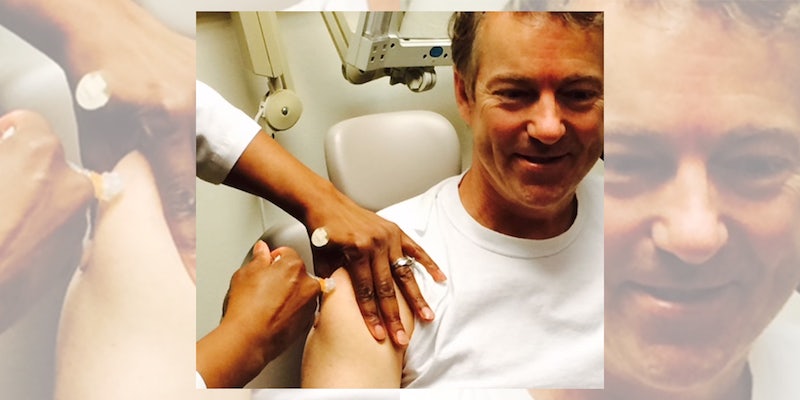 The senator has infamously said that he doesn't need the vaccine because he had COVID-19.

A resurfaced photo of Sen. Rand Paul (R-Ky.) getting a vaccine is tricking social media users into believing he received the COVID-19 vaccine.

Paul insists that he doesn’t need the vaccine because he had the virus and now has natural immunity against it. He tested positive for COVID-19 in March 2020. He was the first known senator to contract the virus.

This goes against the Centers for Disease Control and Prevention guidelines. A CDC study of people, coincidentally in Paul’s home state of Kentucky, who had COVID-19 found that unvaccinated people were twice as likely to be re-infected with the deadly virus as vaccinated people. Thus, it recommends vaccines for people who’ve been previously infected and recovered.

Now an old picture is convincing people that Paul either changed his mind about the vaccine or is lying.

Paul tweeted the photo in 2015. In a bit of foreshadowing, he captioned it, “Today I am getting my booster vaccine. Wonder how the liberal media will misreport this?”

The picture resurfaced over the weekend, leading people to mistakenly believe the Paul had received the COVID-19 vaccine in spite of his many vows not to do so.

“You’re a few days late and ½ deaths short,” one person commented on it on Monday.

Reporter Sam Stein appears to have been among the first to notice that the image circulating on Twitter was dated.

“Folks, I regret to inform you. the gotchya photo you’re sharing online of Rand Paul getting the COVID vaccine is actually him getting a Hepatitis A booster,” Stein tweeted Monday morning.