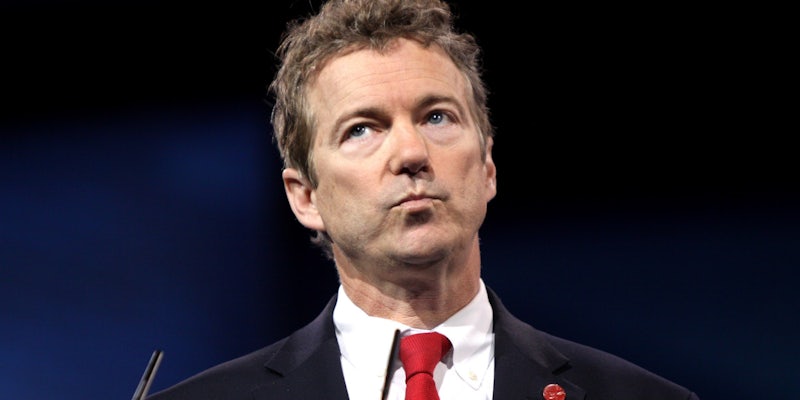 Paul says he plans to bring a vote to the floor next week.

In a statement, Paul’s office said it would “use all legislative vehicles” to demand a vote next week on defunding the healthcare organization.

“The continued disregard and disrespect for human life at Planned Parenthood, a partially taxpayer-funded organization, is shocking and appalling,” Paul’s spokesperson told the Daily Dot on Friday.

A video secretly recorded by anti-abortion activists and posted to YouTube on Monday has given conservative politicians a new platform to seek eliminating Planned Parenthood’s federal funding. The activists behind the video, members of the recently formed Center for Medical Progress (CMP), have been widely accused of misleading people by artfully editing their footage.

Where is the media storm over the selling of babies’ body parts? It’s time to defund @PPFA: https://t.co/YxFkvRt6QS (2/2)

Investigations into the video maker’s claims have been launched by the governors of at least six states, including Texas, Ohio, Indiana, Georgia, Wisconsin, and Louisiana.

The chief allegation arising from the video is that Planned Parenthood is “selling” the body parts of aborted fetuses. However, Deborah Nucatola, Planned Parenthood’s research director and the subject of the video, explicitly states otherwise in a portion of the recording edited out of the widely circulated 9-minute version.

“This is not something with any revenue stream that affiliates are looking at,” Nucatola says. “This is a way to offer patients the services they want and do good for the medical community and still maintain access.”

The video purports to show that Planned Parenthood engages in the illegal black market sale of “aborted baby parts,” as it is described by the activists behind the video. Instead, the video shows that the organization’s affiliates receive legal financial reimbursement for costs related to the storage or transportation of fetal tissue samples for medical research.

This distinction is apparently being ignored by Paul, who maintains the narrative that Planned Parenthood’s actions involve “potentially criminal activity.”

“Recent video revelations, involving potentially criminal activity, make it more obvious than ever that this organization has absolutely zero respect for the sanctity of human life and is an affront to the most basic human dignity enshrined in our founding documents,” Paul said.

So far, no evidence has been disclosed proving Planned Parenthood engaged or engages in criminal activity based on the video. No charges have been filed in the year since it was filmed.

Some speculate that the activists behind CMP held the video’s release until just before an important vote was taking place. This theory is given credence by the fact that two GOP congressmen—Rep. Tim Murphy of Pennsylvania and Rep. Trent Franks of Arizona—have admitted to seeing the video weeks ago, but said nothing about it publicly.

“The continued disregard and disrespect for human life at Planned Parenthood … is shocking and appalling.”

“The hope was to have as much information as possible so that the authorities could be notified before the media,” Franks said on Wednesday.

When asked why he and other congressional leaders waited to respond to the video, which supposedly contained evidence of a criminal conspiracy, Murphy simply walked away from reporters and demanded not to be quoted. “This interview didn’t happen,” he said.

Republicans defeated a bipartisan bill on Tuesday morning intended to fund Susan G. Komen, the breast cancer research and advocacy organization, based on the controversy drummed up by the undercover video. Komen is tied to Planned Parenthood through grants it provides for breast cancer screenings. Before the video was released, the bill, which would have created a commemorative coin, and the profits from which would have partially gone to Komen, was on track to pass. On Tuesday morning the bill had 307 co-sponsors, including 142 Republicans. After the video, so many sponsors had quit the bill that it was dropped entirely from the day’s agenda.

It’s unknown what effect—if any—defunding Planned Parenthood would have on its ability to provide abortions services, as the organization is restricted from using taxpayer dollars to fund the procedures. Abortions only make up roughly 3 percent of Planned Parenthood’s total patient services, which largely consists of cancer screenings, contraception, and STD testing and treatment.