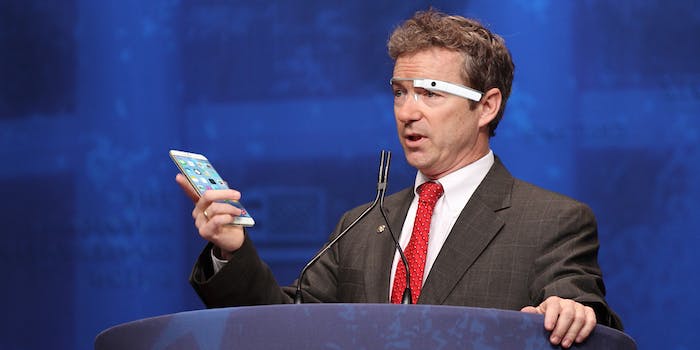 Paul still refuses to confirm a Presidential run. Maybe he just likes the way the free market economy has expressed itself in rent price out there.

Finally, a Republican senator from Kentucky is setting up an office in Silicon Valley, where he has fans who may help him run for president.

That’s likely a sentence that’s never been written until recently, when Rand Paul (R-Ky.), darling of the civil libertarian wing of the Republican party, admitted he was courting like-minded figures in California’s tech scene.

Paul confirmed to the San Francisco Chronicle on Saturday that his staff was “in the process of” creating an office near the country’s tech capital. He refused to clarify if this is evidence of a presidential run—he’s widely speculated to want to do so, though he hasn’t formally announced it—though it’s hard to imagine why else a Kentucky senator would want an office on the other side of the country.

He told the Chronicle that there are “a lot of smart people in Silicon Valley, and we want to use their brains to figure out how to win,” though he didn’t specify exactly who was supposed to be winning.

Of any politician thought to be a major candidate for U.S. President in 2016, it’s Paul who has a reputation as a major critic of the National Security Agency. As revealed by documents released by former systems administrator Edward Snowden, the NSA has incredible power to exploit the Internet, including one program, codenamed PRISM, which it uses to tap tech companies like Google and Yahoo for foreign customers’ user information. Estimates vary wildly, but it’s been speculated that those revelations’ cost to American-based cloud storage services could be tens or hundreds of billions of dollars.