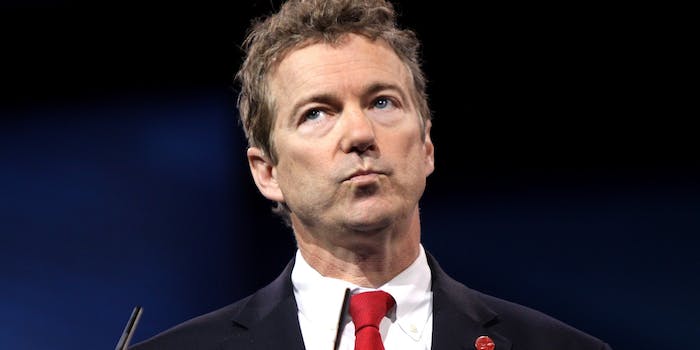 Sen. Rand Paul (R-Ky.) has a new hurdle in his bid to become the Republican presidential nominee: Leaders of his super PAC have been arrested.

The U.S. Department of Justice has indicted Jesse Benton, John Tate, and Dimitrios Kesari for allegedly hiding payments to an Iowa state senator during the 2012 presidential campaign of Paul’s father, Ron, according to a report in Yahoo Politics. They have been indicted on six counts of conspiracy, making false statements, filing false records, and obstruction of justice.

Former Iowa State Senator Kent Sorenson pled guilty last year to having accepted payments from the campaigns of Ron Paul and Michelle Bachman to secure his endorsement. Benton resigned as reelection manager for Senate Majority Leader Mitch McConnell in the wake of the Sorenson investigation.

Through a campaign spokesperson, Rand Paul issued a statement faulting the “Obama justice department” for the indictments, coming, as they do, before the first Republican debate on Thursday.

Senator Rand Paul is disappointed that the Obama justice department chose to release this just prior to the highly anticipated first Republican presidential debate. It certainly appears suspiciously timed and possibly, politically motivated. Additionally, these actions are from 2012 and have nothing to do with our campaign.

These actions may not be inextricably linked in criminality with Rand Paul’s campaign, certainly, but they clearly have something to do with the senator, given the actors run his Super PAC, presumably with at least his tacit approval.

Sen. Paul’s campaign did not immediately respond to request for comment.