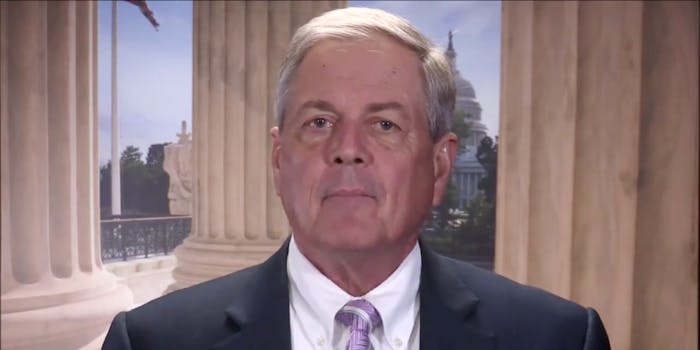 People who attended the meeting said it made them feel uncomfortable.

During a meeting with constituents at a local diner in South Carolina on Friday, Republican Rep. Ralph Norman pulled out a loaded gun in an attempt to show that guns are only dangerous when criminals have them.

Norman kept his .38-caliber Smith & Wesson handgun in full view of his constituents for several minutes, he told the Post and Courier, to make those at the meeting feel “safer.”

Two people who attended the meeting, however, said the gun made them feel uncomfortable.

“I had looked forward to a respectful dialogue with my representative about common-sense gun violence prevention policies,” Lori Freemon, a volunteer with Moms Demand Action for Gun Sense in America, told the Post and Courier. “Instead, I felt unsafe when he insisted on showing us his loaded gun and keeping it out on the table for much of our conversation.”

Lori Carter, a public school teacher in North Carolina, said that at one point Norman placed his gun on the table, making her feel uneasy that someone could pick it up and take advantage of the situation.

“And then he chose to take the gun out and put it on the table not knowing if any of us had mental health issues,” Carter said. “What was to prevent me from leaning across the table to take that gun? So to me, it was contradictory.”

“I’m not going to be a Gabby Giffords,” Norman said afterward, referring to the former Arizona Democratic congresswoman who was shot outside a Tucson-area grocery store during a constituent gathering in 2011.

Giffords and her husband, astronaut Mark Kelly, did not find Norman’s comments amusing and responded on Twitter later in the day.

Serving in Congress is about listening and leadership, not intimidation and showmanship. When “leaders” make constituents feel unsafe, they have no place in elected office. https://t.co/HuWHCUNH7v

When I think of @GabbyGiffords, I think of courage and public service, not intimidating constituents. You’re no Gabby, @RepRalphNorman. You pull out a gun when you are prepared and need to use it – not for a stunt. https://t.co/kkAHo2eSuE

Others, including Arizona Sen. Jeff Flake, also weighed in.

I sincerely hope you never have to experience what my friend @gabbygiffords experienced. But to suggest that she might have avoided being shot had she carried a weapon as she spoke to constituents that morning is inappropriate and inconsiderate. https://t.co/gnuSko0qcB

Today at a meeting with South Carolina @MomsDemand volunteers, Congressman @RalphNorman took out a loaded handgun and to show it off to meeting attendees and said, “I'm not going to be a Gabby Giffords.” No, really. https://t.co/LmSBkIV4Uy

This South Carolina US Representative, @RalphNorman, took out a loaded handgun at a meeting with @MomsDemand today.

And they wonder why we march.

We’ve reached a critical juncture when someone elected to lead and enact policies on behalf of people mocks a courageous victim of gun violence to argue why guns should be respected. When guns matter more than people…https://t.co/mREHnm1IoB

The reactions to his handgun didn’t sway Norman’s opinion about whether it was appropriate for him to bring his gun to the meeting.

In a statement sent to Politico by his office, Norman said he “merely proved a point that guns themselves are not the issue” during a discussion with “a group of organized anti-gun activists.”

“Given the scenario that if someone had walked into that diner and began to fire a weapon, I told them I would be able to defend myself and them as well,” he said. “Mental health, and more importantly, a lack of morality is the driving force behind this epidemic. Guns are not the problem.”

Norman told the Post and Courier that he plans to keep bringing his gun to constituent meetings. He added that he has a concealed carry permit and often brings his handgun with him in public.