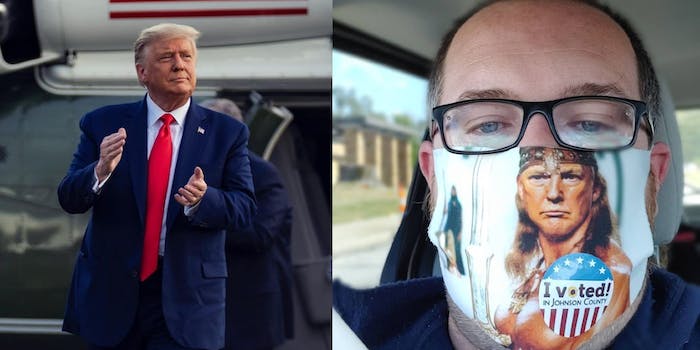 The judge declared the video a work of satire, rendering the case "not actionable."

A lawsuit filed by the parents of two toddlers featured in a manipulated “racist baby” video was dismissed by the New York Supreme Court on Friday.

The video at the center of the lawsuit showed a doctored clip of the plaintiffs’ children with a fake CNN chyron that read, “Terrified todler [sic] runs from racist baby.” Then, the chyron changed to say: “Racist baby probably a Trump voter.” The video changes to show the original and ends with the words: “America is not the problem. Fake news is.” It was created by pro-Trump meme maker Logan Cook, better known as Carpe Donktum online, and shared by the former president on Twitter last June.

Cook used a viral video of the children that originally showed the two toddlers running toward each other and embracing. It was a heartwarming video that made rounds in 2019, garnering actual coverage from CNN and other outlets.

The lawsuit, filed last September, alleged that Cook “manipulated and adulterated the Plaintiffs’ video, cut it down in size, and knowingly used a portion of it out of context, sending out an extremely distorted and false message.” The plaintiffs in this case were Michael Cisneros, Alex Hanson, Erica McKenna, and Daniel McKenna, parents to the boys in the video.

The lawsuit also claimed that Cook utilized the video of the boys—without the parents’ consent—for advertising and “commercial exploitation” to benefit himself, Trump, and the Trump campaign. They also state that Trump “misappropriated” the original video by posting the manipulated one to his now-banned Twitter account.

In the New York Supreme Court’s decision filed July 9, Judge David Benjamin Cohen dismissed the suit, citing the video’s initial newsworthiness and lack of evidence that the video was used for advertising purposes. Additionally, Judge Cohen declared the video a work of satire, which does not fall under statutes regarding “advertising.”

“Since the video is therefore a satire, albeit one which some may consider to be rather distasteful, this Court is constrained to find that it is not actionable,” part of the dismissal reads.

The judge also stated that the lawsuit was considered a strategic lawsuit against public participation—a SLAPP suit—based on legislation passed in Nov. 2020 broadening the scope of the law to “afford greater protections to citizens facing litigation arising from their public petition and participation.” SLAPP suits typically refer to lawsuits filed “in retaliation for speaking out on a public issue or controversy,” according to the Digital Media Law Project. The new scope of the law was retroactively applied to the parents’ case and included an amendment that allowed defendants to recover damages from the plaintiff.

However, Judge Cohen determined that “plaintiffs should not be penalized by the draconian language set forth in [the anti-SLAPP law]” because they presented an argument in good faith for the extension of existing tort law.

The Daily Dot reached out to representatives for the McKennas, Hanson, and Cisneros.