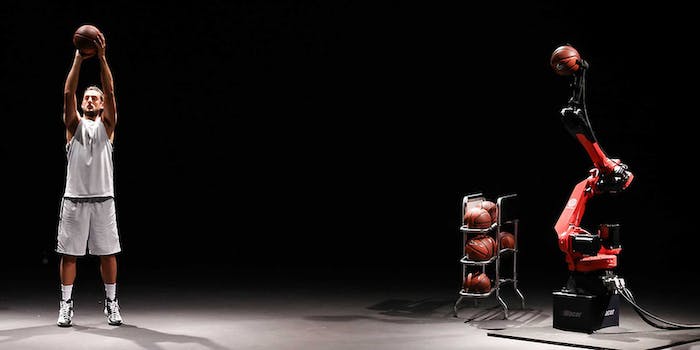 Watch a robot play basketball with an NBA sharpshooter

This robot could probably start for the Knicks.

This robot is so good at basketball, it could even teach Shaq to shoot free throws. To show just how precise and reliable their Racer robot is, Comau Robotics had it compete in a three-point shooting contest against San Antonio Spurs sharp-shooter Marco Belinelli. I’m pretty sure this was how Terminator 2 started.

Comau is an Italian robotics company and the Racer is a small payload robot “ideal for applications where speed and accuracy are essential requirements.” That definitely applies to shooting a basketball. Everybody knows it’s all about mechanics and repetition. (Rajon Rondo hasn’t quite figured that out, but the engineers behind the Comau Racer certainly did.)

In a behind the scenes video we learn that the Racer was designed to be flexible and is capable of mimicking all of the arm and muscle movements of Belinelli.

The robot even did a little bit of showboating after making its first basket, but nothing anywhere as demonstrative as we’ve seen from the Spurs’ small forward in the past. Still, it’s incredibly impressive; seriously, how does it shoot with a hand in its face? This little guy could easily start for the Knicks.

I used to think something like SlamBall would be the natural evolution of the game, but this has me thinking bigger. Picture this: giant remote-controlled robots programmed to play like past NBA greats and dueling it out on the court.

I’m not sure whether I’m terrified or excited.