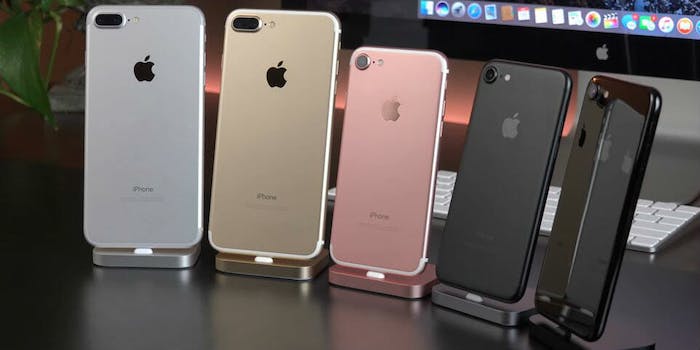 Qualcomm reportedly seeking to ban the import of iPhones into U.S.

Qualcomm already cut its anticipated revenue for the quarter by $500 million.

Apple made good on its word to stop paying billions of dollars in royalties to Qualcomm for patented technology it uses in its phones. In retaliation, the irate chipmaker is reportedly considering asking the International Trade Commission (ITC) to ban the import of iPhones into the United States, according to a Bloomberg report, which cites “a person familiar with the company’s strategy.”

Apple’s iPhones are first manufactured in Asia before being shipped over to the United States. A ban on the import of Apple devices could cause supply shortages for the company’s current iPhone 7, 6s, and SE devices, and almost certainly delay the anticipated release of the iPhone 8. The hypothetical ban would be a huge blow to Apple’s bottom line. The U.S. market accounts for 40 percent of the company’s sales, 60 percent of which are mobile devices.

Qualcomm, known best for its Snapdragon line of processors, is one of the largest chipset suppliers in the world. It produces everything from systems-on-a-chip to LTE modems, which Apple uses in its latest iPhones. But hardware only accounts for a portion of Qualcomm’s property. It also possesses a number of patents related to wireless innovations found in nearly every mobile device. Even if the iPhone didn’t contain a Qualcomm module, Apple would still need to pay the company for using those other technologies. That’s where Apple believes Qualcomm is cutting it a raw deal.

“We strongly believe we’re in the right. And I’m sure they believe that they are,” said Apple CEO Tim Cook.

The San Diego-based semiconductor company already cut this quarter’s anticipated revenue by $500 million to account for Apple’s bold decision. As Bloomberg points out, Qualcomm will lose almost one-third of its licensing revenue if the phone manufacturer doesn’t pay up for the rest of the year.

Qualcomm needs to stop the bleeding, so it would allegedly turn to the ITC, an organization capable of blocking the import of goods and processing cases faster than a federal court. It could even test courts in the U.K., Germany, and China, according to Bloomberg Intelligence analyst Matt Larson.