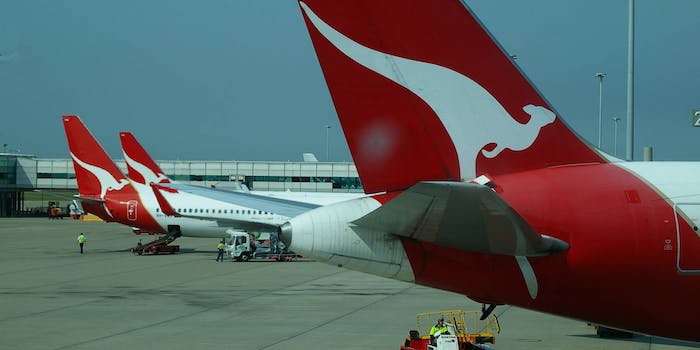 Just as you shouldn’t shout “fire” in a crowded theater, you shouldn’t yell “bomb” in an airport. That principle also applies to the name of Wi-Fi hotspots, as passengers on an Australian plane discovered when their flight was delayed due to a disconcerting hotspot name.

The Qantas flight set to leave from Melbourne was held on the tarmac for two hours after a woman on the flight noticed a Wi-Fi hotspot with the name “Mobile Detonation Device.” The passenger informed the crew members, who spoke to the captain and airport security.

According to one passenger aboard the flight, the captain informed the cabin full of travelers that the flight was to be delayed due to a device that was believed to be on board the plane and needed to be located before they could take off.

The flight continued to be held, as no one on the plane was willing to come forward with the device that bore the name. The crew determined the hotspot could have also been coming from the terminal.

Despite getting the go-ahead from security, some passenger remained uneasy about the trip and opted to get off the flight. Qantas accommodated those who decided to disembark and removed their luggage from the plane.

Security scanned over the plane to search for any potential risks and eventually cleared the flight for takeoff, deeming there to be no threat. The plane finally took off at 9:55pm, a full three hours after the scheduled 6:50pm departure time.