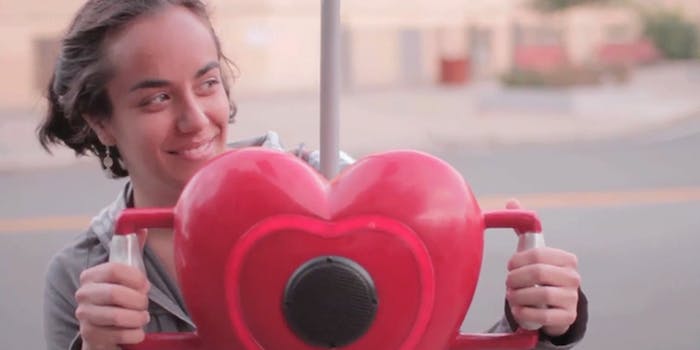 "I've learned just how much people crave having a break from their regular paths through the city."

That’s what artist George Zisiadis hoped to find out with the project Pulse of the City, which was just awarded the 2014 SXSW Interactive Award in the “Art” category. He placed public art installations—heart-shaped monitors that look sort of like parking meters, which participants put their hands on—at five locations across Boston. The monitors record heartbeats, then play back a piece of music unique to that person, using their pulse as the beat.

Pulse of the City – Turning Heartbeats Into Music from George Zisiadis on Vimeo.

“Pulse of the City is unique in how it treats heartbeats not as beeps and numbers but as creative expressions of life,” he explains. “I wanted to use art, design, and technology to promote the use and celebration of public space in an uplifting, playful, and imaginative way.”

The idea was conceived in 2012, as part of San Francisco’s Urban Prototyping Festival. A year later, the city of Boston commissioned five street-ready installations, and Zisiadis collaborated with a sound designer, engineer, and fabricator to make the machines literally sing. Zisiadis was also behind the “Mistletoe Drone” that flew around San Francisco last Christmas.

While it remains to be seen whether the project will travel to other big cities, it’s at least taught him a little something about how we all need some deviations in our everyday life:

“Through the project I’ve learned just how much people crave having a break from their regular paths through the city.”