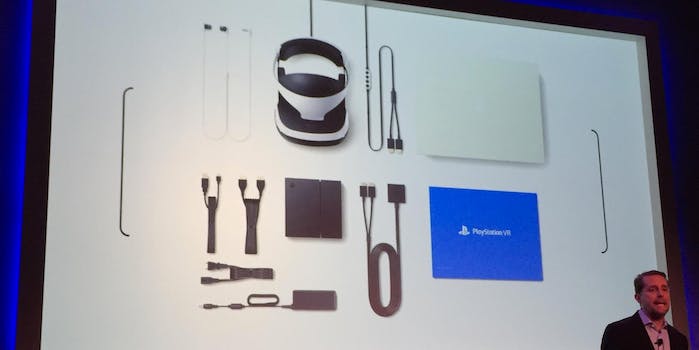 Sony finally reveals how much PlayStation VR will cost, and when it’s coming

One of the most affordable options for virtual reality gaming will come from Sony.

At a press event at the 2016 Game Developers Conference (GDC) in San Francisco today, Sony revealed the official launch date and pricing for the PlayStation VR headset. Poised to undercut the much pricier Oculus Rift and HTC Vive, the PlayStation VR will carry a retail price of $399 when it hits stores in October 2016.

Along with the price and release date info, Sony’s Andrew House also shed some light on the specs of the futuristic wearable. The headset will sport a 5.7-inch OLED display with a full resolution of 1080p, or 960px by 1080px per eye. It will support full 360 degree head tracking thanks to an array of nine LEDs situated around the band. Sony claims that the latency—the time between movements of the controller and headset and the resulting motion displayed on the screen—is less than 18 milliseconds.

The headset will work hand-in-hand with Sony’s DualShock 4 controller as well as the PlayStation Move motion controllers. When taking into consideration the price of added controllers and the cost of the base PlayStation 4 system itself, the entire cost of entry should be around $800, which happens to be the price of the just the HTC Vive headset alone, without a computer to actually use it with.

Sony will be showcasing a number of its virtual reality projects throughout the week, and we can expect to hear much more about the software that will accompany the PlayStation VR at E3 later this year.