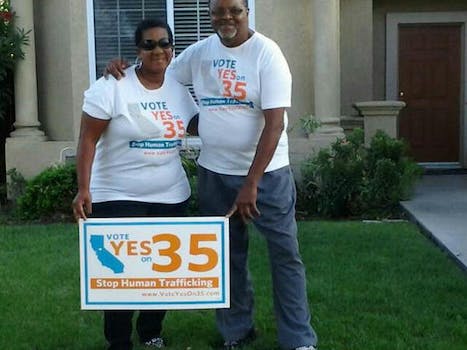 The ruling goes against Californians' overwhelming support for the proposition.

If it weren’t for a judge’s discretion, California would have enacted Proposition 35 and immediately restricted the free speech of thousands of sex offenders Tuesday.

Even though the proposition had constituents’ overwhelming support, a district court has put it on hold.

That’s a direct result of digital rights activists at the Electronic Frontier Foundation and the American Civil Liberties Union. They say the problem with Prop 35, which is designed to make life tougher for sex offenders and human traffickers, is that it would deny them the ability to go online anonymously ever again. Instead, the 77,000 people on California’s sex offender registry would have to register every screen name with law enforcement.

But anonymous speech is covered under Americans’ First Amendment rights. Besides, as the Electronic Frontier Foundation notes, not everyone on California’s sex offender registry is a monster: exotic dancers can be put on the registry, for instance.

Both activist groups spoke out against Prop 35 in the days before Election Day. As the EFF said in a statement, “While we are deeply concerned for the victims of sex trafficking, this proposition unconstitutionally compromises the free speech rights of an entire class of individuals and creates new avenues for government monitoring of online communities.”

It appears their message wasn’t really heard. It passed with than 81 percent support, even higher than it had polled.

At least U.S. District Court Judge Thelton Henderson agreed with the activists. He granted a request for a restraining order on Wednesday and ordering an official hearing on Nov. 20.