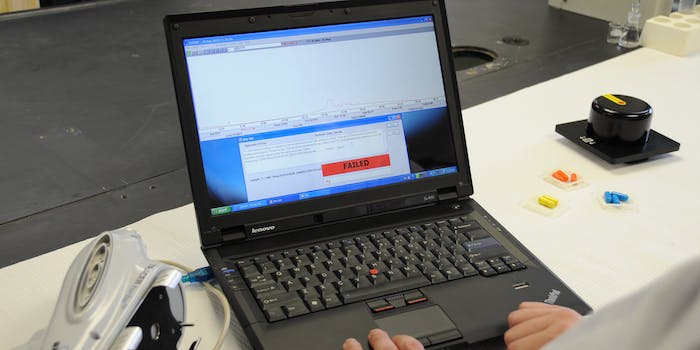 Photo via The U.S. Food and Drug Administration/Flickr

Here’s why the FAA wants to ban laptops in luggage

It's all about fire safety.

The FAA is proposing a global ban on laptops and other large electronics in checked bags. The reason: there’s a serious risk for catastrophic fire if the lithium-ion batteries inside overheat.

The FAA published a paper last month aggregating its findings. Apparently, an explosion can occur if a laptop’s rechargeable lithium-ion battery overheats near an aerosol spray can. (While this sounds like an unusual scenario, imagine a laptop packed in the same bag as a can of hairspray, for example—it’s possible.) If this happened, it could disable the airliner’s fire suppression system. A fire could then rage, unbeknownst to the crew, potentially resulting in “the loss of the aircraft.” If that same sort of explosion were to occur in the main cabin, the flight’s crew would be able to “take appropriate firefighting action,” according to the paper, and continue to monitor the situation for the duration of the flight.

The FAA notes that this isn’t a new risk, it’s just that most people pack their laptops in with their carry-on baggage.

The organization tested a variety of different scenarios. For example, it situated a laptop near a 6-ounce bottle of nail polish remover, a travel-size bottle of hand sanitizer, a can of dry shampoo, and a 16-ounce bottle of rubbing alcohol. While all caused fires, the dry shampoo was the worst. In an airplane, it would have overcome the fire suppression systems. It engulfed the luggage compartment in flames in only 40 seconds.

The recommended FAA ban, which is grounded in science and fire safety, is a contrast to a device ban the U.S. issued earlier this year. In March, the Department of Homeland Security banned tablets and laptops in the cabin on flights departing out of eight Muslim-majority countries. Both the DHS and the Transportation Security Administration declined to give a firm reason for the ban at the time. Given the FAA’s current findings, which directly contradict the orders of that ban, it would seem that fear and ignorance ranked highly in making that decision, though. The DHS lifted the laptop ban in July.

A number of major airlines, as well as the FAA’s international counterparts in countries abroad, agree with the conclusions of the paper, although further research may be necessary. The United Nations will be reviewing and considering the proposal over the next few weeks, given it’s a global safety issue.

If the UN doesn’t approve the recommendation, then perhaps airlines should just ban dry shampoo. It doesn’t work anyway.