Race for Kentucky Senate seat heats up on Twitter

The South is known for its hospitality, but on social media the race for a U.S. Senate seat in Kentucky has turned hostile.

Senate Minority Leader Mitch McConnell is up for reelection in 2014, and many Democrats are hoping to take down the long-sitting Republican, even teasing a run by actress Ashley Judd. But those efforts to unseat were hampered this month by the Twitter feed of Progress Kentucky.

The left-leaning Super PAC issued an apology on Tuesday after some criticized the group for making racist remarks about McConnell’s wife, Elaine Chao, who was born in Taiwan and served as labor secretary under President George W. Bush. In the Feb. 14 tweet, the group wrote “This woman has the ear of [Sen. McConnell]—she’s his wife. May explain why your job moved to China!” The tweet included a link to a story about Chao, who allegedly said Americans need to work harder. Although the message has since been removed, it was preserved by media outlets across the county.

If the reaction on Twitter was any indication, Progress Kentucky wasn’t helping their cause.

“Are you going for sounding like a race baiting douche bag? Because you won!!! Keep it classy Progress Kentucky,” wrote Lisa Carter in response to the tweet below, which was screen captured by the Daily Dot just moments before the group deleted it. 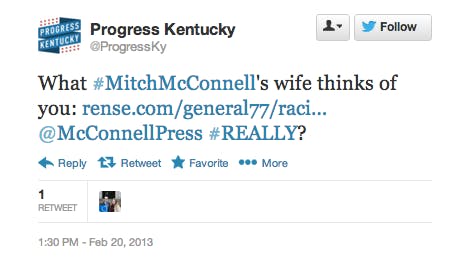 On Tuesday night, the group issued an apology about the tweets, saying: “We apologize to the secretary for that unnecessary comment and have deleted the tweets in question. In addition, we have put a review process in place to ensure tweets and other social media communications from Progress KY are reviewed and approved prior to posting.”

Even Judd, who hasn’t announced her plans for the 2014 race, got into the mix on Tuesday, tweeting that the racist comments were “wrong” and “unacceptable.” It’s not the first tweet that’s made news from the Kentucky-raised actress. Earlier this month, she asked people to join a mailing list, which was seen by many as a chance to lay some campaign groundwork.

Judd herself has been the subject of two recent YouTube videos, launched by McConnell’s team and Karl Rove. The videos are critical of Judd’s Hollywood background and her current state of residence, Tennessee. It’s an impressive assault on a candidate who hasn’t even announced, but would have big name recognition.

One thing is for certain: Kentucky is in for a long campaign season.