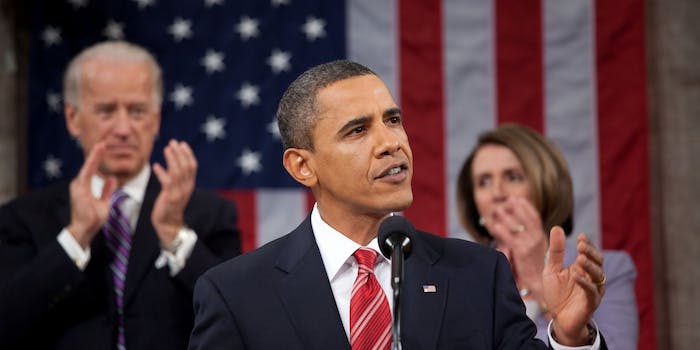 Finally, you can cross the speech of Thomas Jefferson and George W. Bush.

Yes, it’s true, you could be a good American Tuesday night and watch President Obama give his State of the Union speech. But do you really think he’s going to say anything new this time? After all, Obama only uses words, just like all previous presidents. You’ve probably heard all the words before.

Thankfully, the Sunlight Foundation knows computers can use words, too, and it’s created a brand-new State of the Union Machine to randomly create new speeches based on those that came before. Using so-called N-gram models to mimick speech, the SOTU Machine is endlessly tweakable, using archives of some of the nation’s greatest orators: Thomas Jefferson, Abraham Lincoln, Teddy Roosevelt, George W. Bush.

“Do anything, it is my strongly held conviction that when a little boy became our 12th grandchild. I’ve instructed our Government regulators to stop all new production of the change going on there, a reopening of dialog with the participation of the United States Congress: To come: the beginning of a new initiative I call America in his heart.”

Mix Ronald Reagan’s beloved speeches with the ones Jefferson hated to give? That equals stoner talk, apparently: “Have no territorial ambitions. Let’s check our progress except those we can all be higher.”

But what happens, I wondered, when you just simulate George W.’s patter?

“As peril draws closer and closer. Terrorist camps in Somalia. Ability to sell American goods and create deadly havoc in large areas of Iraq into the system afloat, and looked into a conservative mix of bonds and stock funds. Succeeded with Libya, while starving its citizens.”

Ouch. Here, try it yourself.