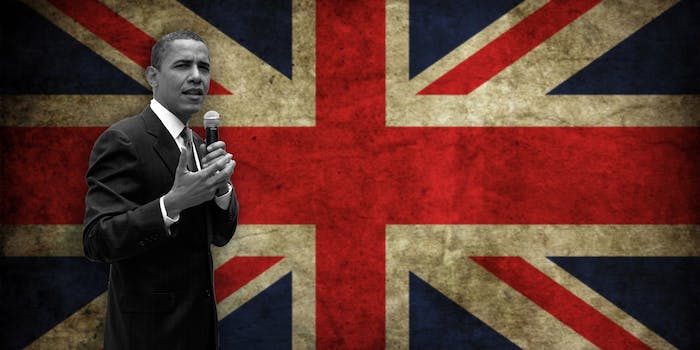 President Barack Obama on Wednesday announced his opposition to Scottish independence, taking the unusual step of personally tweeting his view from the White House Twitter account.

The president rarely writes his own tweets. That task is usually handled by the White House Office of Digital Strategy. In the past six months, according to a Topsy analysis, only 17 tweets have been tagged “-bo,” which signifies a hand-crafted message from the tweeter-in-chief.

The president’s anti-independence position, which he nodded toward in June, unites him with his U.K. counterpart, British Prime Minister David Cameron, who on Monday warned of the “painful divorce” that a vote for independence would signify.

“There’s no going back to the way things were,” Cameron said. To entice disgruntled Scots into giving the union another chance, he promised that “a vote for ‘no’ means real change.”

The White House did not respond to the Daily Dot’s questions about why the president had chosen to make this announcement on Twitter and whether an additional statement on the subject would be forthcoming.

Current polling on the Scottish independence referendum, on which Scots will vote on Thursday, is split roughly 50-50.

Photo by jurvetson/Flickr (CC BY 2.0) | Remix by Fernando Alfonso III