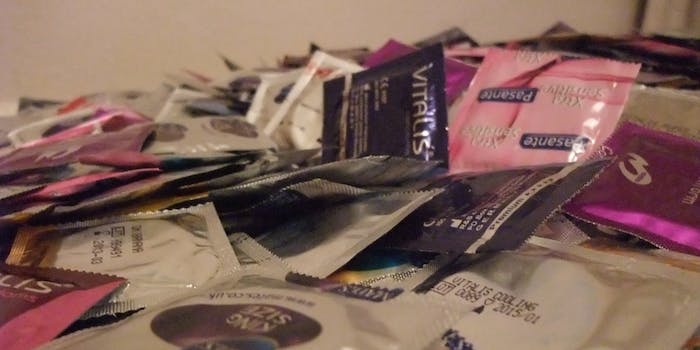 Authored by state Assemblyman Isadore Hall, AB1576, otherwise known as the “condom mandate,” requires all adult film company employers to “protect employees from exposure to, and infection from, sexually transmitted diseases.” The bill also requires adult industry employers to adhere to strict CDC testing regulations, which many in the industry argue would dismantle current industry testing standards. (Performers are generally tested for STIs every two weeks).

Over the past few weeks, industry members have launched a #stopab1576 hashtag campaign, as well as a petition. Kink.com also produced a series of #StopAB1576 PSAs on YouTube, urging both industry and non-industry members to petition the California state assembly to vote against the bill.

I’m not anti-condom. I am anti government mandate. There is more to AB1576 than condoms. Performer health and privacy at risk. #stopAB1576

PERFORMERS! If you produce your own content for your sites, or online stores. #AB1576 affects you! #StopAB1576 Go to http://t.co/2Thf5LYBAj

There are many reasons why the adult industry would be opposed to AB1576, the most simple—and arguably the most cynical—of which is that films featuring condom use do not sell as well as films that don’t. If AB1576 is approved, many industry members have threatened for years to move production out of California to Las Vegas, so they can continue to shoot condomless scenes.

“After the economic crash in ’08 and the rise of online piracy, the industry is simply not in a position to sustain more loss of revenue,” Joanne Capachero, the spokesperson for adult industry advocacy group the Free Speech Coalition (FSC), told the Daily Dot. “People that enjoy watching adult material prefer condom-less scenes, and viewers will find what they want from overseas, where there may be no regulation whatsoever. If U.S. producers are required to use all forms of barrier protection, they will not be able to compete in the marketplace.”

Others argue that AB1576 represents an extreme form of government intervention, and that the bill infringes on performers’ right to freedom of expression. “To be told how to do my job by the government doesn’t feel free to me,” performer Christian Wilde says in the Kink PSA. “We are safe. We are careful. We don’t need anybody’s outside help to tell us how to do our jobs properly and safely.”

In Los Angeles County, where a large percentage of adult film production is based, condom use is already legally required on adult film shoots thanks to Measure B, which California voters passed in 2012. But Measure B is rarely enforced, and most adult production companies do not use condoms on set, instead screening every two weeks for STIs through an independent testing agency.

For the most part, the industry says their current testing protocols have been successful. While there have been a number of documented cases of HIV transmission in the industry, including at least three known cases in the last year alone, the FSC says none of the transmissions took place on set, and production moratoriums prevented other performers from becoming infected.

Yet the California state assembly, as well as AIDS Healthcare Foundation head Michael Weinstein, have argued that the industry’s current testing standards are insufficient to protect against infection, and that adult performers have to comply to state regulations just like any other employee. (OSHA regulations prohibit exposure to blood-borne pathogens on the job.)

But industry members argue that AB1576, which would test performers according to CDC requirements, is insufficient in protecting performers against transmitting STIs. In fact, they say, the new testing standards would actually put performers at increased risk. “If AB 1576 were to pass, it will destroy the industry’s successful health and safety protocols that took more than a decade to develop, and a STI testing system that utilizes advanced testing technology,” Capachero says. Plus, the bill requires producers to maintain records of performers’ private medical data, thus compromising performer privacy and increasing the risk that their private medical information is hacked or stolen.

And yet “the biggest issue about this bill is not about testing or condoms. It’s about how incredibly VAGUE the language is,” the performer Jiz Lee recently wrote in a letter to the California Assembly members. In the letter, Lee cites the heteronormativity of the wording of the bill (which does not take into account transgender or queer performers), as well as the clause that requires “condoms and other protective barriers” during sex scenes, which many have interpreted as an allusion to performers wearing protective goggles during shoots. (The AIDS Healthcare Foundation, which backs the bill, has denied that this will be the case.)

“The question is, who’s next?” Lee says. “If outside interests with big money can come in and set down rules and regulations for an industry they’ve made no attempt to even reach out, then what’s to say that the next target for condom legislation isn’t [those outside the industry]?”

AB1576 will be brought to a vote today, May 21. If it passes, it’s unclear whether adult producers will make good on their eternal threat to move out of California, or if filming will be driven underground (thus potentially putting performers at risk). But either way, there’s one positive outcome from #stopAB1576: the fact that it’s brought an otherwise fractured, troubled industry closer together.

“This is a diverse industry—gay, straight, trans, fetish, independent, queer, studios—and we can be pretty silo’d,” says Stabile. “What the social media campaign has allowed us to do is see where our allies are, and talk about issues, and to lend resources. It allows us to share articles, to share legal analysis, to talk about ways the bill might affect one group that another wouldn’t see. It’s been incredible.”

Photo by Robert Elyov/Flickr (CC BY 2.0)