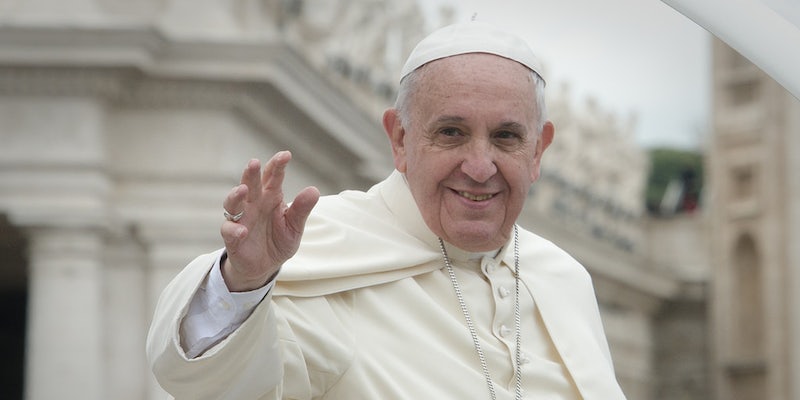 He almost made it back to Rome without talking about Kim Davis.

Speaking to reporters on Monday, Pope Francis said that government officials have a “human right” to refuse to marry same-sex couples if doing so violates their conscience.

During his 10-day trip to the United States, Francis, whose church is firmly against same-sex relationships, had not specifically addressed the national controversy sparked by the arrest of Kentucky county clerk Kim Davis. But he did so on his trip back to the Vatican after taking questions from reporters.

Davis was jailed this month for refusing to issue a marriage licenses to gay couples after the Supreme Court ruled in June that state-level bans on gay marriage are unconstitutional.

“Conscientious objection must enter into every juridical structure because it is a right,” said Francis, in Italian, while on his return flight to Rome. He was specifically asked by a reporter, according to Reuters, if he supported government officials who refused to issue marriage licenses to gay couples.

“If someone does not allow others to be a conscientious objector, he denies a right.”

Conscientious objection has to be respected by the law, Frances said, “Otherwise we would end up in a situation where we select what is a right, saying: ‘This right has merit, this one does not.’”

During a speech at Independence Hall in Philadelphia last week, Francis said that “religious freedom” was the right to worship God, but that “religious liberty … transcends places of worship and the private sphere of individuals and families.”

Francis warned equally against “forms of modern tyranny” that seek to “suppress religious freedom” and those who would use religion as “a pretext for hatred and brutality.”

Francis asked the religious—Christians and followers of other faiths—to “join their voices in calling for peace, tolerance, and respect for the dignity and rights of others.”