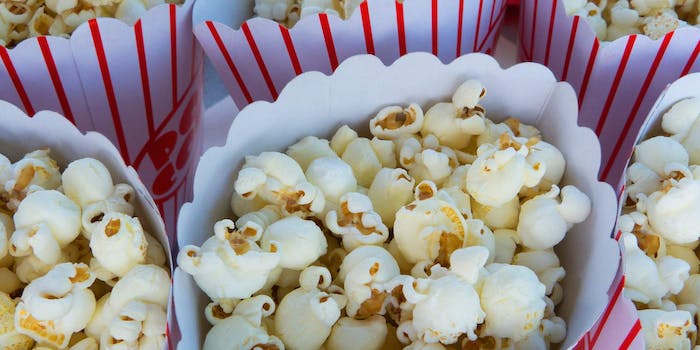 Pour one out for Popcorn Time.

It appears the show is over for Popcorn Time; the most popular version of the torrent streaming application has been shut down for good.

The application, made popular by its ability to stream torrents of films and TV shows, no longer works and the Popcorntime.io domain that hosted the service is no longer available.

The change in Popcorn Time’s status comes after a tumultuous week for the development team behind the project. A portion of the developers decided to leave Popcorn Time early last week following a decision to introduce paid anonymous VPN service.

The defecting members feared adding a paid element would open them out to potential lawsuits (though there’s little indication that the app being free makes it legal). Additionally, “some devs grew unsure about their liabilities towards the content the app presented,” former Popcorn Time developer Niv Sardi told the Daily Dot.

Sardi, along with other members of the development team, opted to split off and start the Butter Project. The variant will be for “the people interested in the technical development of the apps,” rather than the content.

“We want to build a great base for anyone to make streaming applications, may they be commercial (HBO could fork Butter and make a great experience for their users) or free software,” Sardi explained. “The idea is to centralize the innovation so that users get the best experience they can and let other people worry about the content.”

While the Butter Project is getting off the ground, Popcorn Time appears to have crashed and burned. Members of the team that remained with Popcorn Time informed Torrent Freak that they lost control of the popcorntime.io domain, which was owned by one of the departing members.

Though the team planned on keeping the application running, Popcorn Time developer Wally has shut down the servers for the program. “I shutdown all the servers, there is nothing I can do anymore. I deleted any logs that can be harmful for any other dev,” he told Torrent Freak.

Sardi said that the Butter Project is friendly with developers from the Popcorn Time but is no longer a part of the team in any way so, “we can’t comment on what the other part will do.”

Variants of Popcorn Time that enable users to stream the contents of torrents are still available. The most notable alternative is Time4Popcorn, though it’s been accused of playing host to adware and viruses. Popcorntime.io was the most popular choice—and generally believed to be the safest option—and was backed by the original developers of the service.

For those looking for a glimmer of hope for the future of Popcorn Time, Sardi said the creators of Browser Popcorn, a browser-based version of the streaming service, have been in contact with the Butter Project team and are “interested in making a Browser Butter.” Browser Popcorn had an extremely short-lived existence before being stomped out by MPAA.

Other projects that were initially under development for Popcorn Time seem as though they will also be reborn as part of the Butter Project, including an iOS app that was said to be near completion.