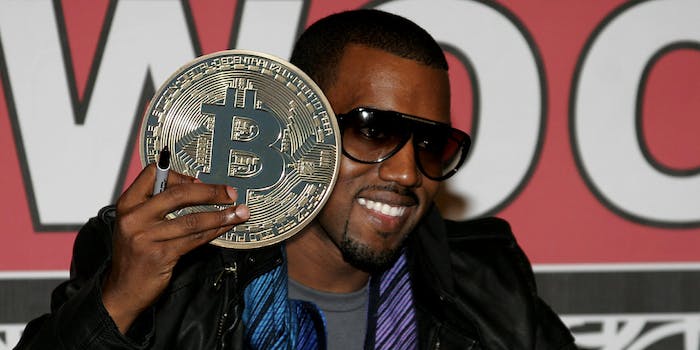 He'll say anything to tokenize Yeezy.

If you haven’t heard yet, Kanye West is back on Twitter.

His unusual reintroduction—filled with drawn-out musings about freedom of speech and public praise for Donald Trump—hasn’t been welcomed by all of his supporters. Opinions about the musician are becoming more polarized as his tweets push further into far-right territory, prompting both Democrats and Republicans to tweet their own personal take.

One user has stood amid all the noise and confusion, but they’re not invested in the political chatter. For the past few days, Anthony Pompliano (or “Pomp”)  has been replying to West and Trump with witty remarks meant to encourage them to invest in blockchain technology.

If you open any of West’s recent tweets, there’s a good chance you’ll come across Pompliano’s often humorous Bitcoin pitch at the top of the replies. In some cases, hundreds of followers have liked or retweeted his posts. It’s his shameless, brazen language and relentless pursuit to enlist West into the cryptocurrency army that has gotten people—even those with little knowledge of blockchain—to take notice.

Kanye you would love Satoshi.

He wants to decentralize the world and empower people just like you.

The mastermind behind these posts intricately weaves his advertisement into a seamless response to West’s often abstract thoughts. When West wrote, “just think of someone you hate and try saying even to yourself that you love that person,” Pompliano shot back, “Kanye you would love Satoshi. He wants to decentralize the world and empower people just like you.” (Satoshi is the name used by the mysterious creator of Bitcoin).

And when West wrote, “we are more worried about what we can lose than what we feel,” Pompliano replied “Kanye you won’t lose anything on the Bitcoin blockchain. It can’t be changed. It can’t be hacked. It’s true freedom & security.” The one-sided exchange goes on and on for dozens of tweets with the sole purposes of encouraging West to tokenize, or digitize, his company Yeezy.

“The reason I’m doing it—one is, it’s just funny and kind of me and a bunch of friends joking around,” Pompliano, managing partner at venture firm Full Tilt Capital, told the Daily Dot. “But two is, the serious aspect behind it is—a lot of people don’t understand Kanye is the creator of one of the fastest growing retail companies in the world with Yeezy. We believed that every company and piece of real estate—every asset in the world will become digitized or tokenized.”

A few days after West’s Twitter account resurfaced, Pompliano got a glimmer of hope. West became the biggest cryptocurrency prospect in the world with one word: “decentralize.”

Cryptocurrency believers took the tweet to be a cryptic message and anticipated a more definitive follow-up.

After the tweet, Pompliano ramped up his efforts, rebounding to West’s seemingly endless stream-of-consciousness tweetstorms with a smooth transition into blockchain discussions. He even started occasionally throwing Trump into the mix.

We need it as legal tender in the US.

The only thing people agree on is Bitcoin Kanye.

Kanye imagine if you had ultimate freedom.

No manager.
No boss.

Let the blockchain manage the equity in Yeezy. You’ll be unstoppable.

But why West? Pompliano, a former Snapchat employee who sued the company for allegedly inflating numbers, thinks the hip-hop mogul is the perfect fit for Bitcoin because he is at “the intersection of pop culture, tech, music, finance.” He also thinks his tweets about freedom of speech and independence align with how blockchain cuts out the middleman, allowing West’s followers to invest directly in his brand.

“He’s no longer beholden to all of the traditional financial markets,” Pompliano said. “He basically decentralized that by giving as many people as possible access to own a piece of his company and he’s in charge. You see him tweeting about-—he’s nobody’s client, he doesn’t need a manager, and I think that by tokenizing the capital stack he doesn’t have to answer to anyone. He has people who believe in him and are going to give him capital and he can go make his ideas a reality.”

Pompliano has gained support from other Twitter users and says he secured a “few hundred” followers since his first post to West. Most users respond as allies, urging him on and even posting their own tweets that attempt to introduce the two.

You should be meeting with @APompliano to #TokenizeTheWorld Kanye!

Others have accused him of being a bot engaging in shilling, or shameless advertising to trick people into investing in a coin so it increases in value.

Yo these constant block chain replies to his tweets aren’t relevant to his tweets or even well thought out. Tokenize Yeezy? What does that mean? Plz stop diluting the power of the tech with unsophisticated shilling :)

Pompliano hasn’t denied any of those accusations and has even embraced them to the delight of his followers.

“I say pretty much what I think,” Pompliano said. “None of it is pre-planned, there are no bots, there is no anything.  I’ve got mobile notifications turned on, when he tweets, I grab my phone, I read what he wrote, and respond. I’m sure at some point I’ll run out of things to say but until then we’re going to keep going.”

The blockchain supporter has no intention of ending his pursuit to get West’s attention by trolling his controversial tweets, “He’s not going to respond, but he’s reading them. It’s something that’s fun and we’ll see how it goes,” Pompliano said.