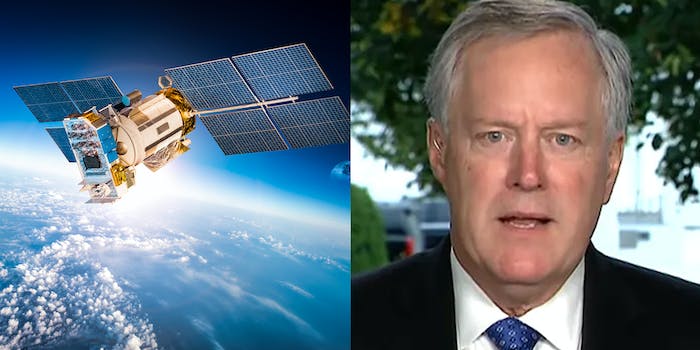 You may have seen the term “ItalyGate” come across your social media feed at some point over the last few months. For those unaware, ItalyGate is the outlandish conspiracy theory that claims an Italian satellite somehow switched votes from Donald Trump to Joe Biden during the 2020 presidential election.

Yet some of the biggest names in the pro-Trump world are now turning against ItalyGate despite previously touting the theory as undeniably true. Why?

Did conservatives suddenly note the total lack of evidence for the claim? No: Trump backers now say ItalyGate was a narrative covertly designed by anti-Trump forces to discredit their election fraud movement…

ItalyGate first emerged in December after an article in the Italian newspaper La Verità sensationally claimed that Trump and his team had been investigating allegations that the U.S. Embassy in Rome had partnered with an Italian defense contractor to alter the outcome of the presidential election.

As with any good conspiracy theory, the more the allegation spread, the more outlandish the claims became.

The formula is simple: Just combine a foreign country, a shadowy U.S. intelligence agency, and mythical hacking powers. That’s why ItalyGate is nearly identical to another popular conspiracy theory that alleged that the CIA was running a secret vote-stealing server in Germany.

The best cannabis drinks on the market right now

The cannabis industry is giving alcohol companies a run for their money with the development of THC and hemp-based drinks. Sales of cannabis-infused beverages soared by 40% last year and according to experts, the market is expected to continue growing.

As more of these products flood the market, how are you to know which ones are worth your coins? I’ll tell ya right here…

ItalyGate became so popular that on Jan. 1, Mark Meadows, who was Trump’s chief of staff at the time, sent an email to then-acting Attorney General Jeff Rosen asking him to watch a YouTube video covering the conspiracy theory.

Unsurprisingly, Rosen shot down the nonsensical story and requests for ItalyGate to be investigated. As should be obvious, numerous media investigations into the conspiracy theory proved it to be totally baseless as well.

So why did Trump supporters sour on ItalyGate even when the former president’s most trusted insiders seemed to believe it?

It turns out Edwards sent a letter to the White House regarding ItalyGate that Meadows forwarded to Rosen. But why would that convince conservatives that the conspiracy theory was suddenly false?

According to the Gateway Pundit, arguably one of the biggest promoters of debunked conspiracy theories on the internet, Edwards didn’t just promote ItalyGate like her fellow conservatives but was actually its “brainchild.”

“This story, known as ‘Italygate’ or ‘the Italian Job’, was put together to destroy President Trump.  It wasn’t true,” the Gateway Pundit wrote recently.

You heard that right. Instead of simply admitting that conservatives concocted and spread a baseless conspiracy theory, the Gateway Pundit instead argues that ItalyGate was purposely created as part of an even grander conspiracy theory to discredit conspiracy theorists.

But don’t struggle trying to wrap your head around the double conspiracy too much. As it turns out, the Gateway Pundit doesn’t provide any evidence for the claim that Edwards created ItalyGate either.

Check out the Daily Dot’s coverage of ‘ItalyGate’ here.