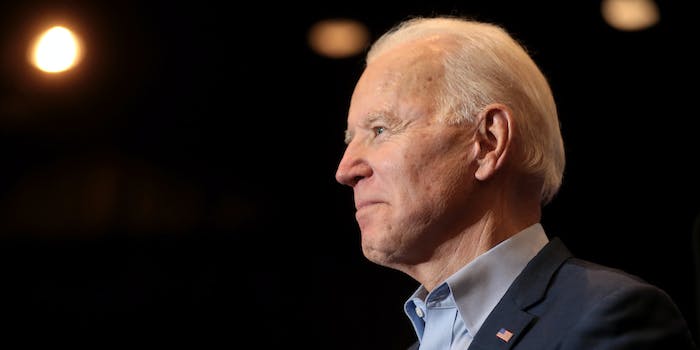 Conspiracy theorists are sounding the alarm over the belief that President Joe Biden is preparing to monitor and fact-check their private texts.

But the allegations—based entirely on the misrepresentation of a single media report—are not true.

The debacle began last week after Politico published an article detailing the Biden administration’s efforts to crack down on misinformation regarding Covid-19 vaccines.

The report states that groups allied with Biden, such as the Democratic National Committee (DNC), plan to work with fact-checkers and SMS carriers in order to dispel false claims being “sent over social media and text messages.”

The passage was immediately seen by many right wing users on Twitter as proof that the government would begin monitoring their texts.

One of the bigger promoters of the false claim was Matt Walsh, a commentator with Ben Shapiro’s Daily Wire.

In a widely viewed video shared to Facebook, Walsh asserted that the DNC is “colluding with fact checkers to monitor our text messages.”

Walsh also expressed shock at the fact that no other media outlet had covered the bombshell revelation.

“How is this not a big deal at least? That’s the report, that they’re going to be monitoring our private text messages,” Walsh said.

Explore your creativity with a week of free Skillshare classes

Hobbies and passion projects are a great way to stay motivated, inspired, and positive – even in the most trying times. They’re like the light at the end of the tunnel that never goes out, but flickers and fades from time to time. Which is totally normal, everyone gets a little stuck now and then.

If you can relate, maybe you should try a Skillshare class. From watercolors to charcoal, you can easily learn to create in any medium you like. It’s also great for photographers, designers, web developers, and content creators (plus, a LOT cheaper than college courses)!

“Today we learned the Biden administration considers censorship applicable to private speech as well, what you say in private when you’re alone with your phone,” Carlson said on his late-night show. “You won’t be able to say or read what you want because the DNC plans to control, and apparently has the ability to control, the flow of information that you receive on your phone.”

But the actual author of the Politico report, Natasha Korecki, has repeatedly pointed out that she never once claimed that texts would be monitored.

In a series of tweets, Korecki attempted to push back on the overwhelming amount of misinformation that had twisted her reporting.

“As the story points out, it’s allied, private groups that are working with SMS carriers—not the White House,” she tweeted. “Even then, there is no ability for groups to read individual texts aside from the ones they receive themselves.”

Korecki further clarified that the private groups would alert SMS carriers to false claims that had gone viral online, allowing them to send out alerts.

While it hasn’t been clarified, users would likely have to sign up or opt-in to receive such alerts to begin with.

Either way, the claim that the Biden administration will be scanning hundreds of millions of private text messages in order to chastise Americans for sharing information it doesn’t like is patently false.