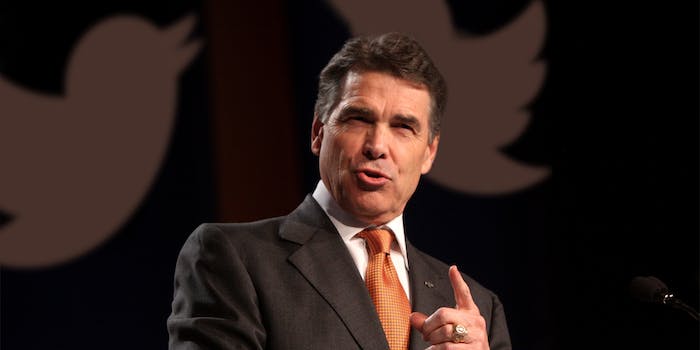 During the traditionally hot and humid August in Washington, Congress escapes for a summer recess, which they prefer to call a “district work period.” This week, they’re back in session, providing a great opportunity to review how politicians spent the last few months through the lens of their deleted tweets saved by the Sunlight Foundation’s Politwoops project. Here are just a few favorite deletions from the Twitter accounts of governors, members of Congress, and the candidates hoping to join them on Capitol Hill: 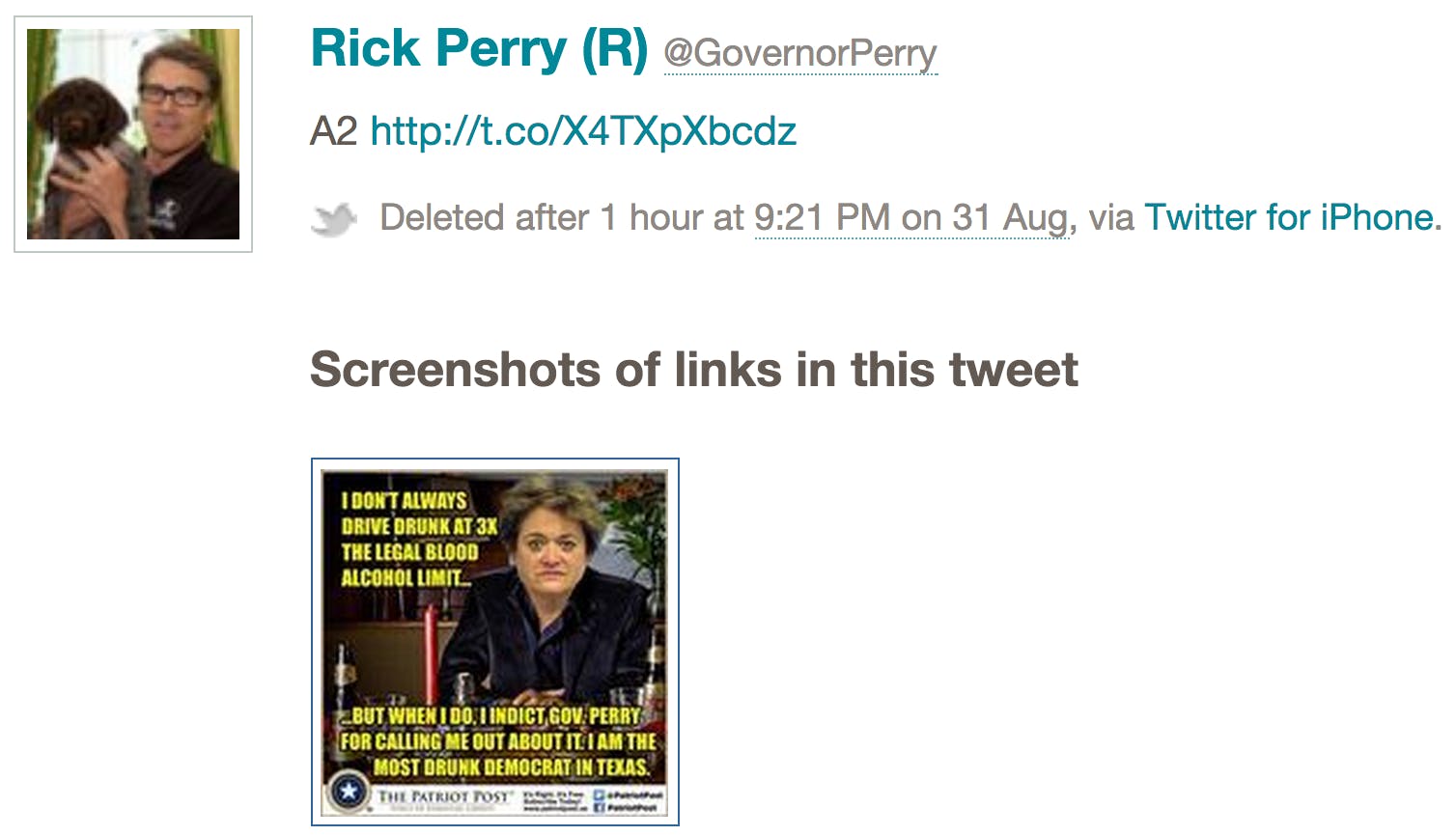 This deleted tweet from Governor Rick Perry of Texas, riffs on the Most Interesting Man in the World meme to mock the drunk driving arrest of a district attorney whose office funding he has threatened to veto from the state budget. That threat caused a judge (not the district attorney, who recused herself) to bring charges against Gov. Perry for abusing his official capacity and coercing a public servant. In response to the outcry about the tweet, which was deleted and archived by Politwoops, @GovernorPerry tweeted, “A tweet just went out from my account that was unauthorized. I do not condone the tweet and I have taken it down.”

Gov. Perry is one of the few politicians with more than two Twitter accounts associated with his public image. There’s @TexGov, the account run by the staff of his government office, there’s @TeamRickPerry, the account run by his campaign staff, and then there’s @GovernorPerry, his personal account and source of this deleted tweet. When asked why @GovernorPerry blocked a Dallas News reporter from following the account, Gov. Perry’s press office responded, “the governor has sole control of his personal Twitter account.” 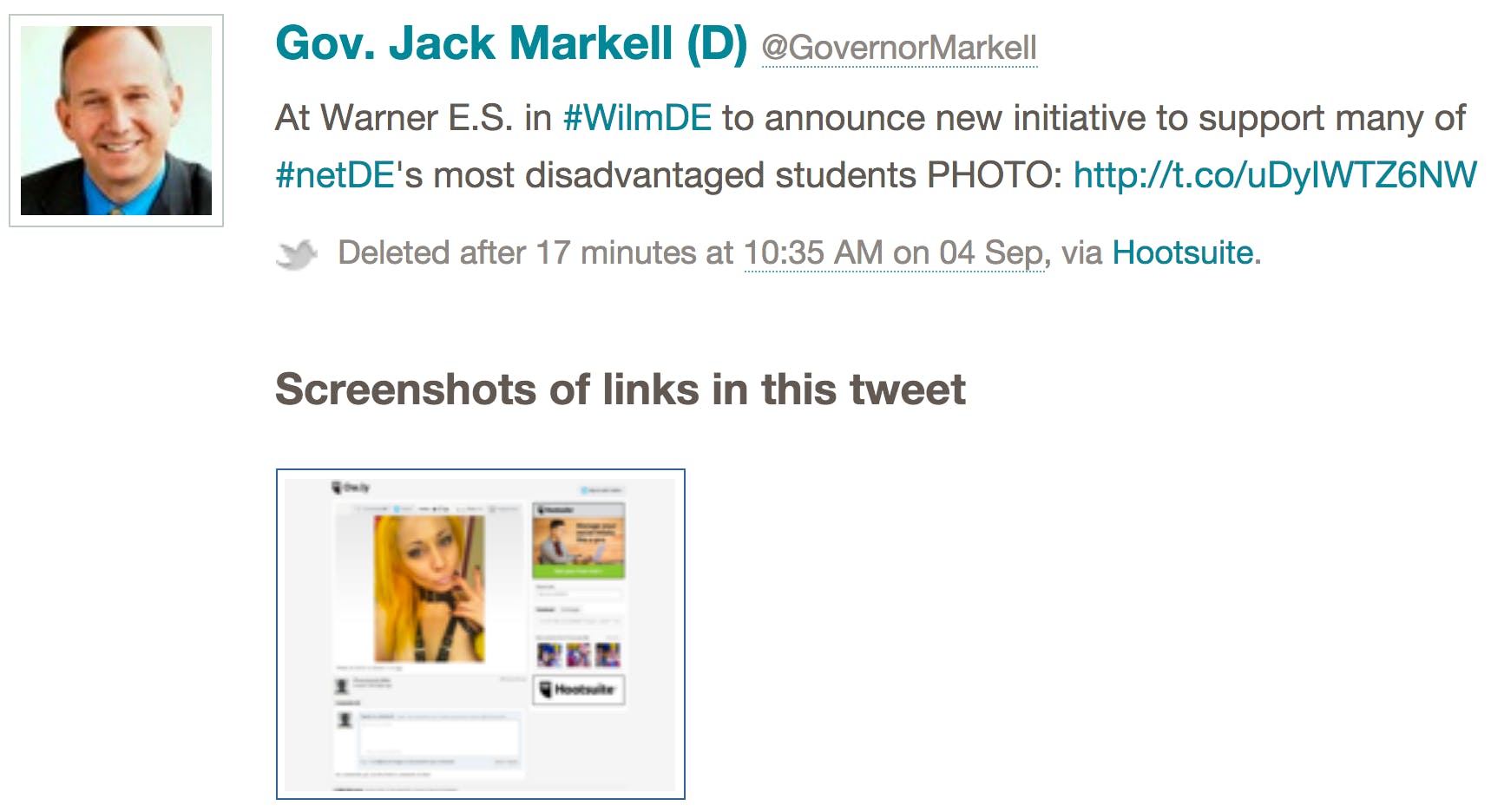 
Delaware Gov. Jack Markell deleted this tweet with an unusual image selection following a press conference on “new initiative to support many of #netDE’s most disadvantaged students.” The linked image was a 2010 selfie of an Estonian model named Precious Little wearing leather straps. Gov. Markell’s Twitter account quickly deleted the tweet and posted an apology, later releasing a statement saying it was an inadvertent edit of the link by a staffer. “The lessons here are not to compose tweets too quickly and there is a lot of odd stuff on the Internet. We just wish the accidental link had been a cat video,” Markell’s office said.

An inappropriate photo was inadvertantly sent out earlier. We are looking into how this occurred but apologize to anyone who was offended.

The campaign Twitter account of David Perdue, a Republican Senate candidate in Georgia, shared a clear picture of a check card to the account’s 2,500 followers. The image of card was deleted after being public for 14 minutes. A call and tweet to alert the campaign about the error and request comment were never returned. Who knew that a possible member of the world’s greatest deliberative body could be fodder for the @NeedADebitCard, an account who highlights and warns users, “Please quit posting pictures of your debit cards, people.” 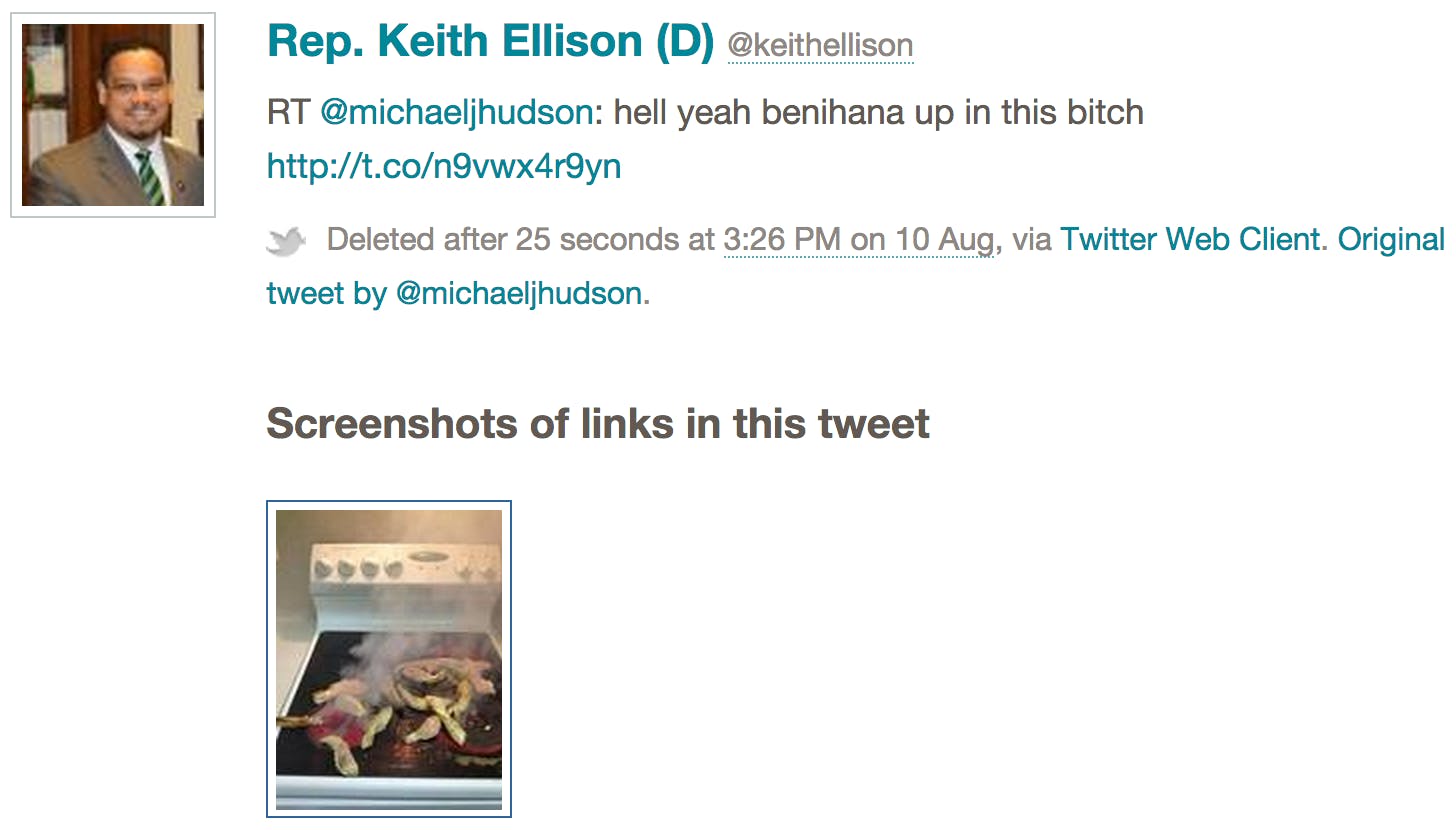 
The official account of Rep. Keith Ellison (D-Minn.) deleted a retweet of a Twitter user attempting to recreate the culinary entertainment of Benihana on an electric stovetop. Rather unsurprisingly, this was simply a staffer error. And after owning up to it, he even earned a retweet from his forgiving boss:

11) Nancy Pelosi forgets what Africa is

Minority Leader Nancy Pelosi (D-Calif.) has one of the closest watched Twitter accounts and, as a member of party leadership, is frequently a target of hateful messages. When her official account mistook Africa as a country, it caused quite a splash. Fortunately for Pelosi, Vice President Joe Biden came to her rescue by making the same mistake in his speech at the summit saying, ​”There’s no reason the nation of Africa cannot and should not join the ranks of the world’s most prosperous nations in the near term, in the decades ahead. There is simply no reason.”

The Twitter account for the office of Rep. Rick Larsen (D-Wash.) was the first member of Congress to share thoughts about Sharknado 2. The tweet stayed alive for 10 hours before his account removed this majestic retweet. He responded to a local news organization who inquired about this “vulgarity”:

9) Joe Manchin gets a bathroom makeover

Hey @Sen_JoeManchin, why’d you delete these bathroom photos from Twitter over the weekend? http://t.co/nB2YqWg5mh #WV pic.twitter.com/hxwKyNWdeS

Sen. Joe Manchin (D-W.Va.)—or perhaps someone running his account—had a great summer, as evidenced by these quickly deleted images of an elegantly tiled shower. While this account never responded to the request for an explanation, it could be related to an earlier deleted message showing off Sen. Manchin’s monetary situation:

8) Adam Kwasman puts his foot in his mouth

Adam Kwasman, an Arizona state legislator and Republican congressional candidate who has since lost his primary, deleted a tweet referring to a bus of migrant children that was expected to come through a protest area. Unfortunately for Kwasman, the bus he photographed was full of kids going to a YMCA came who cheerfully photographed and waved at the protest they went through.

In an awkward interview with KPNX reporter Brahm Resnik, Kwasman said he saw the “fear on their faces.” The reporter later writes, “I had to break it to Kwasman that those weren’t migrant children. Kwasman later deleted the tweet. He did back flips trying to take back the story he told me.”

The account of Gov. Sam Brownback (R-Kan.) thanked the parody account @GOPteens for following him and did not realize the error for 12 hours. @GOPTeens is a sarcastic account about the Republican party’s outreach to teenagers and frequently shares messages such as:

#Teens: How do you #delete a #hacker?

Rep. Chaka Fattah (D-Penn.) appeared to get his hands on a pair of Google Glass earlier in the summer and shared (then quickly deleted) a photo of an empty room with interesting wallpaper through the $1,500 device. 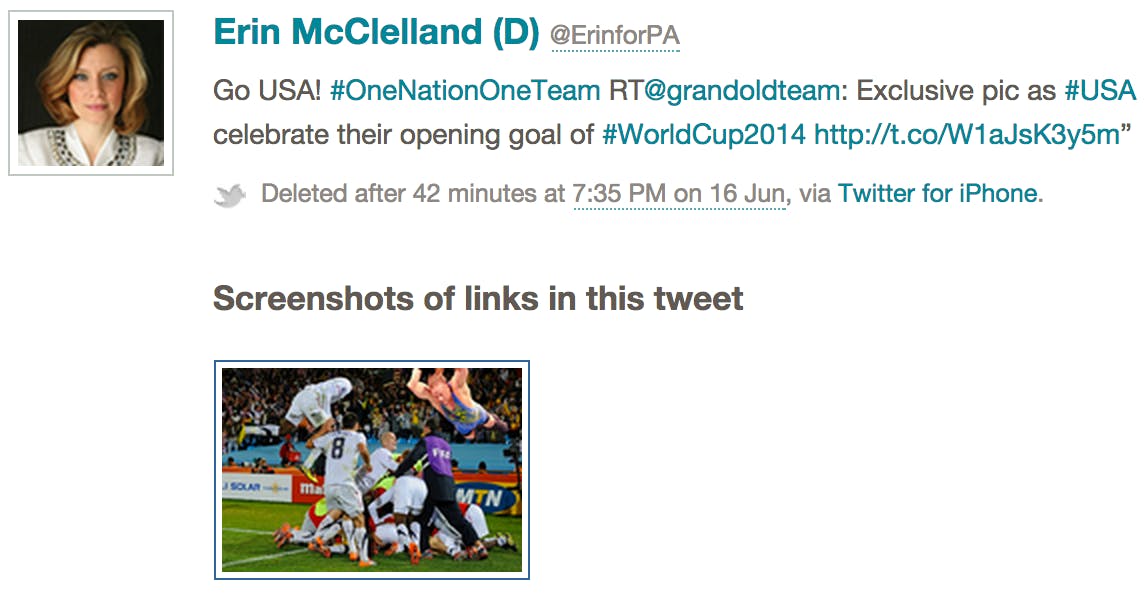 
During the U.S. World Cup match against Ghana, the campaign account of Erin McClelland, a Democratic House challenger in Pennsylvania, deleted a tweet with an obviously photoshopped image showing the 2010 U.S. team celebrating while professional wrestler Rob Van Dam looms overhead while performing his signature Five-Star Frog Splash. Following a request for an explanation, her account responded:

@SFnicko I was informed it was not the correct pic :) 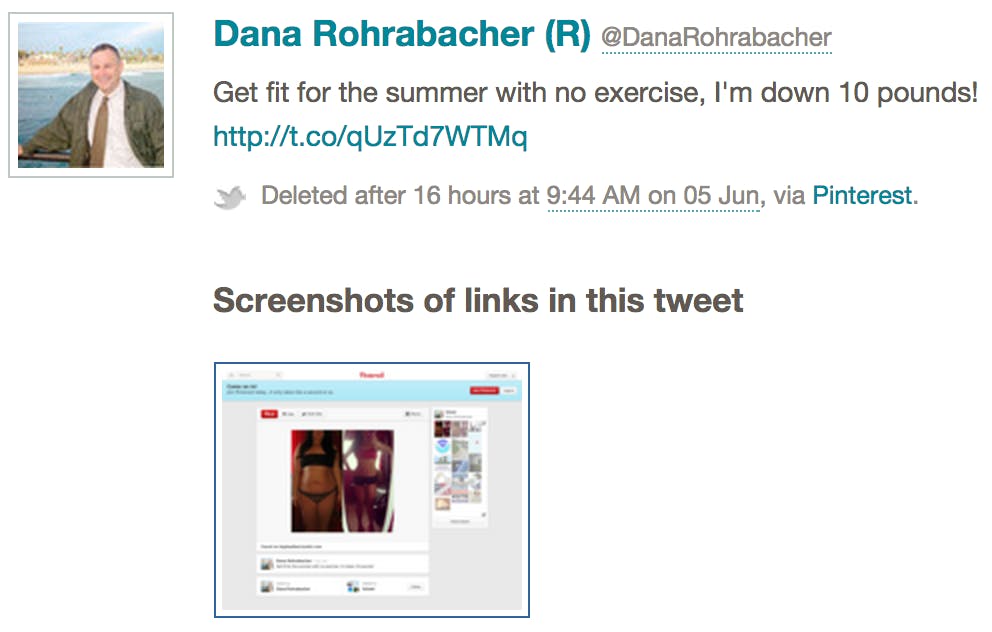 @NathanWurtzel yep, hacked. What a stupid game. Everybody knows I don’t need to lose weight. Ha Ha! Anyway, twernt me

3) Rick Perry reveals his metal side

Another deletion from the personal account of Gov. Rick Perry came in July, when he deleted this link to a curated playlist described as, “High-energy punk, metal, and hard rock with attitude for suiting up and blazing trails.” Sadly, Gov. Perry ignored my request for comments on his musical tastes:

2) Sean Patrick Maloney lands in hot water over a drone 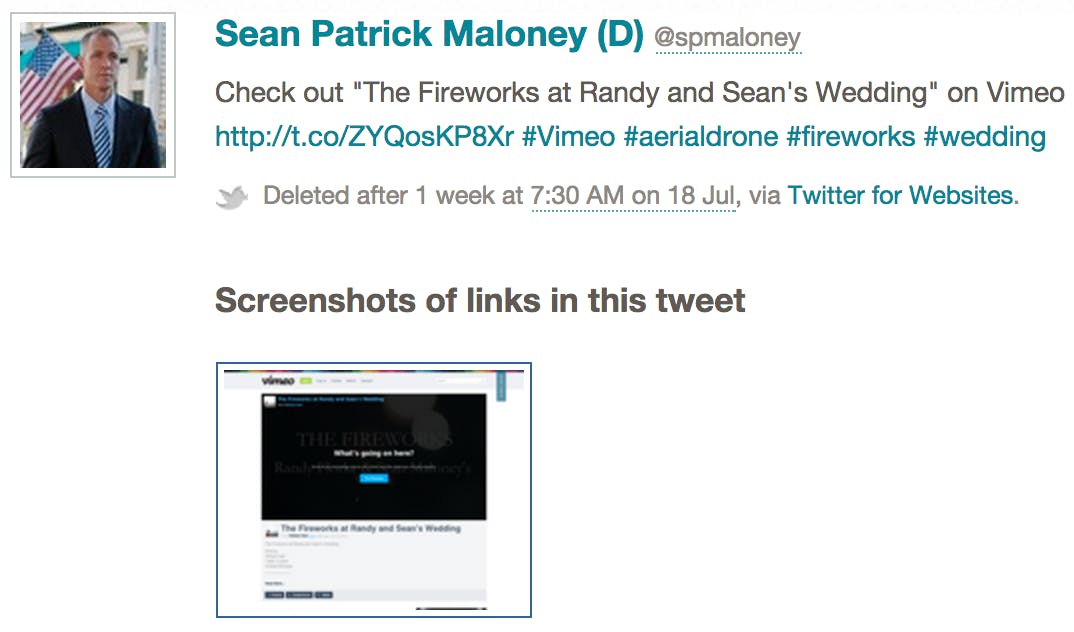 In July, the campaign account for Rep. Sean Patrick Maloney (D-N.Y.) deleted a week-old tweet linking to a video of Maloney’s wedding with footage shot by an aerial drone. That video was also soon deleted as conservative organizations highlighted the extravagance of the wedding. The Daily News asked the Federal Aviation Administration if the drone use violated a prohibition of flying drones for commercial purposes, which prompted an investigation of the incident. In a final twist, Maloney is on the House Transportation and Infrastructure Committee’s aviation subcommittee that oversees the FAA, and his opponent, former Rep. Nan Hayworth, called for Maloney to step down. 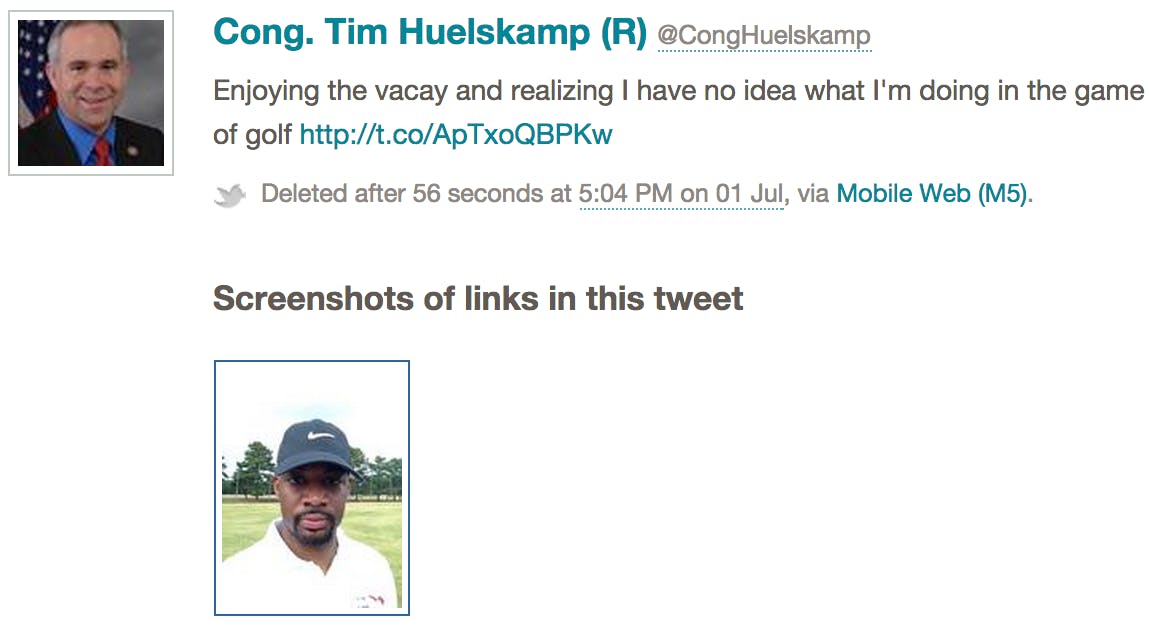 While it’s often quite difficult to discover who is running the accounts of various members of Congress, this deletion clearly came from a staffer who erroneously logged into his boss’ Twitter account. This was removed from the official account of Rep. Tim Huelskamp (R-Kan.) in less than a minute.

Politwoops continues to track new deleted tweets from politicians every day so keep your eyes on the archive for new deletions as the election season heats up!

Nicko Margolies runs the Politwoops project for the Sunlight Foundation.