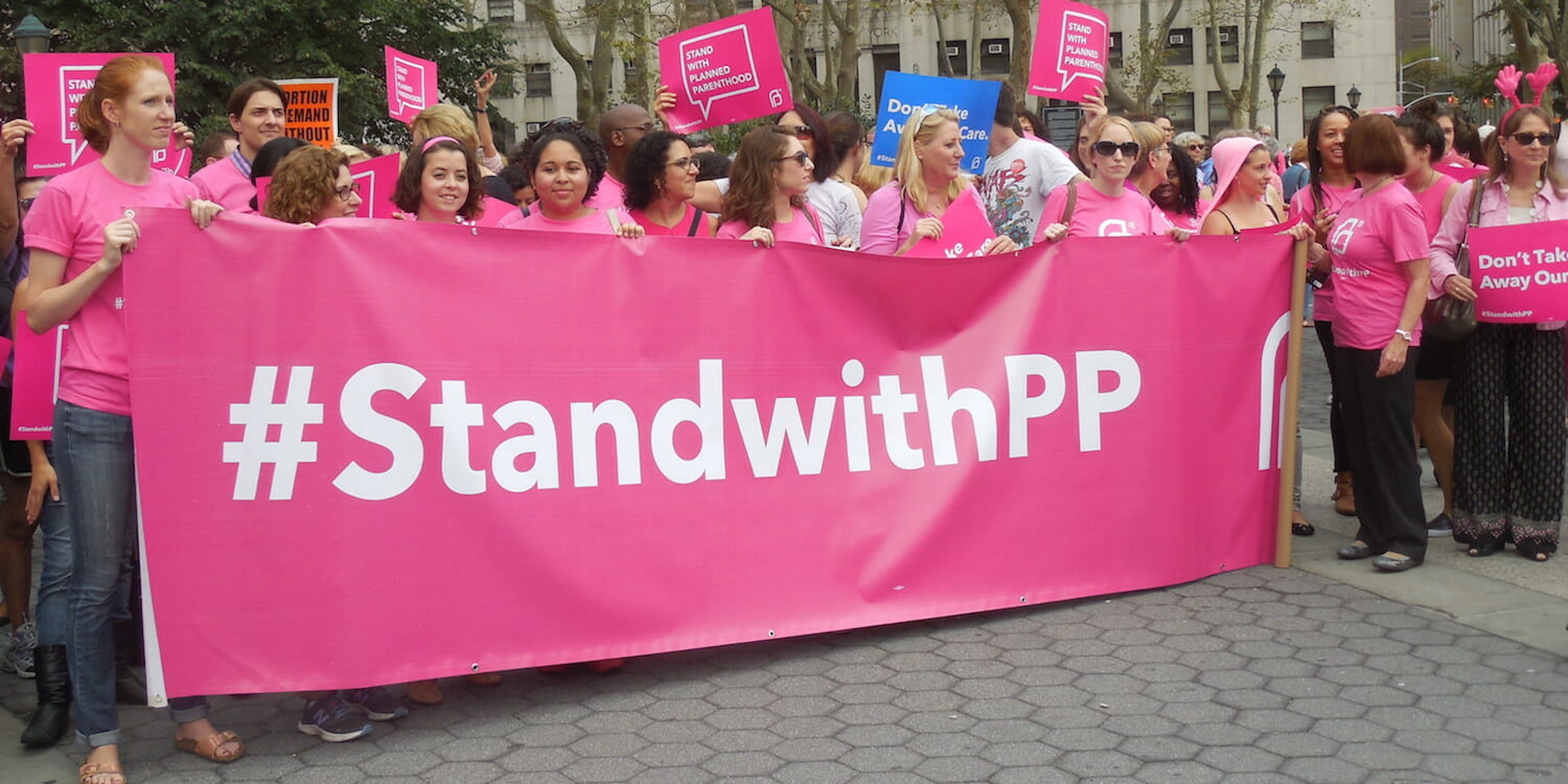 'It's so empowering to be part of the voice of change.'

The fight over Planned Parenthood erupted out of the halls of Capitol Hill and into the streets of New York City on Tuesday, as hundreds gather for the healthcare nonprofit’s Pink Out NYC rally.

An estimated 500 supporters joined Planned Parenthood staff, volunteers, and patients—as well as politicians and activists—to celebrate the wide-range of health services that Planned Parenthood offers to people of all genders, and to condemn the recent House of Representatives vote to advance a bill that would freeze Planned Parenthood’s federal funding for one year.

Planned Parenthood receives roughly $500 million annually in federal funding. The money comes from two programs, Title X family planning and Medicaid. Title X funds may not be used for abortion procedures, while Medicaid—which supplies about 87 percent of the federal money allocated to Planned Parenthood—only allows for its funds to be used for abortions when the procedure is “medically necessary.”

“Congress should be ashamed to punish women who have no other health care options.”

Abortion accounts for 3 percent of Planned Parenthood services, according to the organization’s most recent report. Other services include cancer screenings, tests for sexually transmitted infections, and contraception.

The $528 million Planned Parenthood received from federal funds last year accounts for approximately 40 percent of the nonprofit’s $1.3 billion budget. The Congressional Budget Office estimated on Tuesday that between 130,000 and 630,000 women “would face reduced access” to healthcare if Congress defunds Planned Parenthood.

The vote came after the Center for Medical Progress, an anti-abortion group, released a series of videos alleging that Planned Parenthood has illegally profited from the sale of fetal tissue. This week, Missouri became the sixth state to find Planned Parenthood innocent of any criminal activity. At least five other states and three committees in Congress are investigating the nonprofit’s activities.

“Republicans will have you believe that this is about a single issue of abortion,” said New York City Public Advocate Letitia James, amid cheers. “Well, they are wrong.” 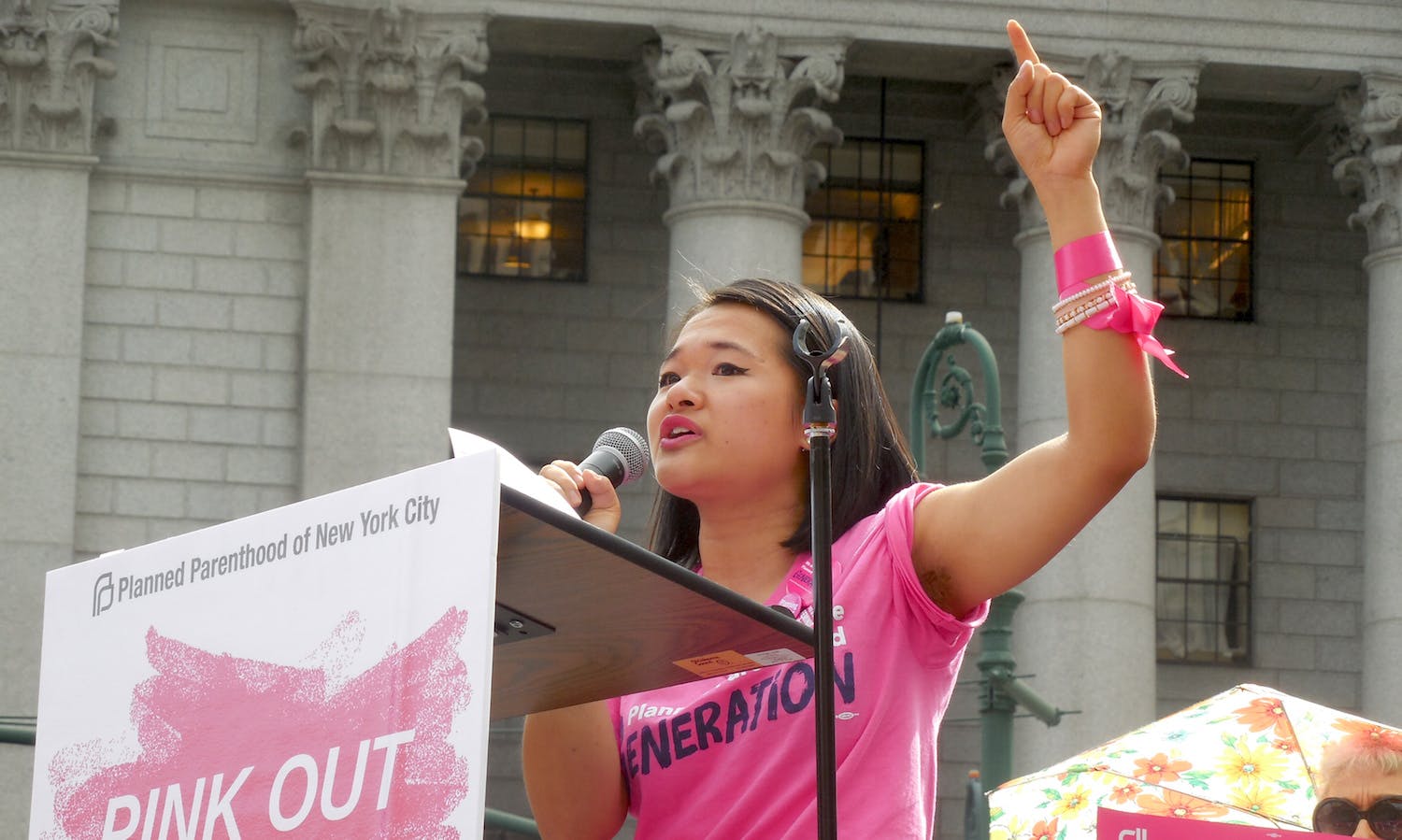 When Jamaican-born poet and activist Staceyann Chin took to the stage, she shared that she had personally benefitted from Planned Parenthood’s health services when she first moved to New York. She added that, since becoming a mother, she has become an even stronger supporter of reproductive rights and Planned Parenthood’s commitment to making reproductive services accessible for all women.

“As soon as I had the experience of being a woman who was pregnant, I thought to myself, ‘Only women who want this should have this,’” said Chin. “After periods, after pregnancy, during marriage, after divorce, after menopause, before my 90th birthday, after my 92nd birthday—no matter where you are in the cycle of your life, we are here today because we believe in the sanctity of choice.”

The faces in the crowd and on the stage were diverse, with people of different genders, ethnicities, and ages in attendance. There was a strong sense of unity, which some attendees credited as one of their reasons for participating.

“I love going to rallies and being part of the solution and connecting with a group of young and old, women and men,” rally attendee Erin Bagwell told The Daily Dot. “It’s so empowering to be part of the voice of change.”

“I’m just glad to be here and supporting everyone.”

Bagwell is the founder of Feminist Wednesday and the producer of the upcoming documentary Dream, Girl. The film tells the stories of young female entrepreneurs, and Bagwell sees the advancements of women in the workforce as intrinsically linked to reproductive rights.

“You can’t ‘lean in’ and make choices about your career without the correlation of making choices about your reproductive health,” she said. “The foundation of women’s economic empowerment is truly to be able to make those choices for yourself. It’s so important that we have access to healthcare, that the government is supportive of it, and that we continue to support amazing organizations like Planned Parenthood that provide that support.”

A 20-year-old attendee named Alex was among the last people remaining at Manhattan’s Foley Square after the rally. She and a handful of other attendees stuck around, holding signs and chanting “No cuts!” at passing cars.

“This was my first rally!” Alex told The Daily Dot. “I’m just glad to be here and supporting everyone.”