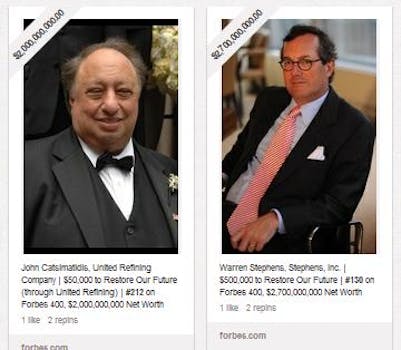 A new Pinterest board identifies 33 billionaires who have donated to the Republican candidate's PAC.

A Pinterest board called “Mitt Romney’s Billionaire Backers” tracks how much money the former Massachusetts governor has collected for the PAC Restore Our Future, a pro-Romney organization.

The two or three month old board has pinned 33 rich people, including Wal-Mart heir Jim Walton (worth $23.7 billion), Hewlett-Packard CEO Meg Whitman (worth $1.4 billion), and businessman Sam Zell (worth $4.9 billion). Each of these donors has given more than $120,000 to PAC Restore Our Future.

The board was started by the Public Campaign Action Fund, a 15-year-old organization that “has brought activists to the fight for comprehensive overhaul of the nation’s campaign finance laws and to make opposing reform a political liability for elected officials.” The group has more than 70,000 members.

In total, the 33 billionaires have given more than $16.3 million to PAC Restore Our Future.